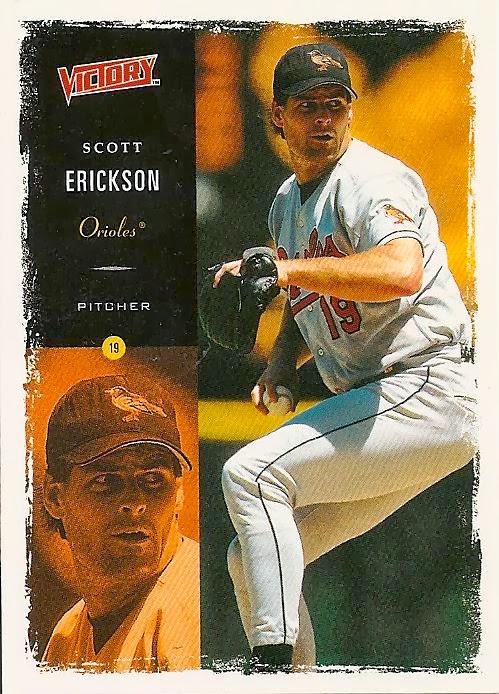 Just in case you thought that Scott Erickson's public profile couldn't get any stranger - author of a no-hitter, former member of People Magazine's "50 Most Beautiful People" list, Metallica fan, Homicide: Life on the Street guest star, and so forth - I just found another unusual story about the ex-Oriole pitcher in the unlikeliest of places: wrestler and heavy metal musician Chris Jericho's memoirs.

I recently started reading "Undisputed: How to Become the World Champion in 1,372 Easy Steps", the second book co-authored by Jericho, one of my all-time favorite WWE talents. Sometime around 2000-2001, "Y2J" spent a memorable evening carousing in a pub on Broadway with Iron Maiden guitarist Adrian Smith and Sebastian Bach. He was so drunk and rowdy that he managed to get himself banned from the bar for the foreseeable future. That's when the story takes a turn:

"After we left the pub, Paul, Jessica (Jericho's wife), her best friend Lisa (presumably sportscaster, model, and current Erickson spouse Lisa Guerrero), and her boyfriend Scott Erickson grabbed a taxi to take us back to the hotel. Erickson was a pitcher for the Baltimore Orioles, whom I met for the first time at our wedding and hadn't liked since. He rubbed me the wrong way with his arrogance and sarcasm right off the bat (see what I did there?). He also had the same horrible hair as Ted Danson in Cheers, which led me to dub him Sammy Badweeds.

When we got into the cab, Badweeds got on my nerves again by being his arrogant and obnoxious self.

'Hey man, you're pretty small for a wrestler. You must really get your ass kicked!'

I tried to ignore him, but he could tell from the look on my face that I was getting pissed.

'What are you getting so upset about? It's just fake wrestling! Its not really a sport like baseball!' he said with a smarmy grin. I closed my eyes and tuned him out."

Of course, Erickson didn't leave it there. He slapped Jericho's friend Paul Gargano in the back of the head when nobody else was looking, allowing an admittedly inebriated Chris to take the blame. Finally, the first-ever Undisputed WWE World Heavyweight Champion boiled over:

" 'That does it! Pull this car over right now,' I screamed at the driver.

I swung open my door and ran around the side of the car to Sammy's half-rolled-down window. I reached through and punched him in the face. Suddenly I was public enemy number one (and I ain't talkin' about Nikki Sixx) to everybody in the taxi."

To sum up, Jericho claims that he didn't even hit Erickson that hard, but that Scott sold it like Shawn Michaels. Back at their hotel, his wife forced him to swallow his pride and apologize to the O's pitcher, who smirked all the way.

Neither Chris nor Scott/"Sammy" comes out of this story looking great, but I can only say that based on the reputation that Erickson earned throughout his career, it doesn't surprise me in the least that he'd be right in the thick of things like that.

HAHAHA! Great story. I don't know if this makes me like him more or less!

I'd forgotten about that H:LOTS episode. I've got the series, I may have to bust it out this weekend. I had stopped watching regularly by then. It had been the best show on TV but at that point I thought it had jumped the shark.

Ryan - Are you referring to Scott, or Chris Jericho?

Bob - I remember that episode. My parents watched Homicide regularly, and I usually watched along with them if I was home.