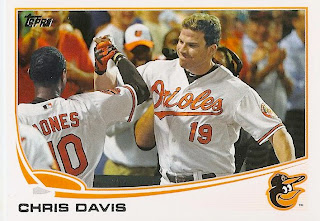 I just had to post a Chris Davis card on the day that he gets honored with a Superman-esque t-shirt giveaway. The legend of "Crush" just keeps on growing, as another recent hot streak has him leading the major leagues with 17 home runs, a .728 slugging percentage, and a 1.165 OPS. I feel like I've seen him hit (at least) one home run in every game I've attended since the beginning of 2012, and it's not far from the truth. (Running tally: 18 HR in 25 games.) Will he come up big again on his big night? Will he get to celebrate with Adam Jones in their own inimitable gesture? I've got a good feeling.
Posted by Kevin at 5:05 PM

Yeah, you can say he came up big.

(didn't I call it on Davis last year? that he could be deadly if he ever gets his act together...)

Max - If you have any other forecasts, I'd love to hear them.