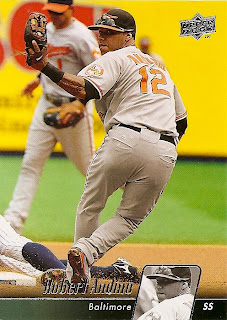 Do you remember back in December, when I pooh-poohed Robert Andino's chances of making the major league roster this season? Yeah, don't forget that I'm an idiot. Though most of the powers that be in the Baltimore organization were fed up with the young shortstop last year, Buck Showalter wanted to see what 'Dino could do with his own eyes. And after spending the entire 2010 season at AAA Norfolk, he hit .295 with a pair of home runs in a September callup. Despite the fact that Buck and others in the O's organization have a man-crush on the aging and offense-deficient Cesar Izturis, Andino joined Cesar on the Baltimore bench to open this season. When J. J. Hardy went down with an oblique injury, I assumed the worst - that Izturis would get the lion's share of playing time at short. But Robert heated up at the right time and seized command of a starting role with three straight multi-hit games. He has gone on to play significant roles in back-to-back wins to open the current road series in Chicago, going 3-for-4 with a walk in last night's 10-4 victory and adding a home run, a single, and two runs scored in tonight's 6-2 win. He is now hitting .348 in a 16-game sample size, and has rendered Izzy virtually irrelevant. I'm still eager to see Hardy return, but it's nice to know in the interim that the #9 spot in the batting order is not an automatic out.
Posted by Kevin at 11:57 PM

I was for sure that he'd be DFA'd before the season started. He's been a pleasant surprise but I really want to see Hardy back soon! Now I just wish the equipment manager would get Dino a correct size hat!

Ryan - The hat kills me too.