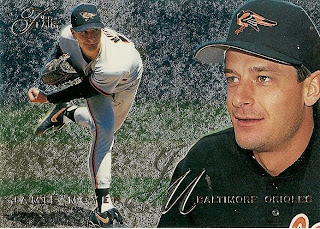 Jamie Moyer seems intent on returning for a 24th season in the major leagues in 2010 (which doesn't even count 1992, when he spent all year with the AAA Toledo Mud Hens). It's a remarkable thing to take the mound in four different decades; it takes talent and good health. Jamie's certainly got the former, but the latter is starting to present a real challenge.
It may not surprise you to hear that a 47-year-old athlete is starting to break down, but the sheer volume of the lefthander's medical woes is daunting. In September, he suffered a sports hernia, for which he underwent surgery on October 2. Five days later he returned to the hospital with a blood infection. After making some progress in recovery, he was hospitalized again on November 24 with recurring symptoms and had a second surgery three days later to eliminate a small collection of infected blood. Moyer has said that he is on the mend, but still has a peripherally inserted central catheter (yikes) and is taking medication.

But wait, there's more. In January, the 258-game winner is scheduled to have surgery on his right knee to repair a minor meniscus tear. Believe it or not, he claims that doctors have projected him for an on-time arrival to Spring Training in a month and a half.
The real kicker to this story is that Jamie had never undergone a single surgery in his lengthy career until these troubles began in October. When it rains, it really does pour.
Posted by Kevin at 10:37 PM

He is reaching the age where a broken hip is the only logical next step.

I guess I just don't have the mentality it takes to be a pro athlete. If I'm Jamie Moyer, I'm saying to myself, "I've made millions of dollars playing a game that I love and I got to do it for longer than most. I'm still relatively young and if I retire now I won't have to deal with continuing sports related health problems. Tahiti, here I come!"

I agree with you Stacey, I think I would take the money and run, especially at 47!

I'd take him back here if he didn't insist on being in the rotation. Surely he'd have a lot to teach the young pitchers, he's been in the league longer than they've been alive!

Stacey and Ryan - According to Baseball-Reference, he's made at least $75 million in his career. Even halving that for tax purposes...I think I could live comfortably on that.

FTB - Happy New Year to you!

Interesting to see who else might get into the four decade club:
Smoltz
Sheffield
Vizquel
Big Unit
anyone else?