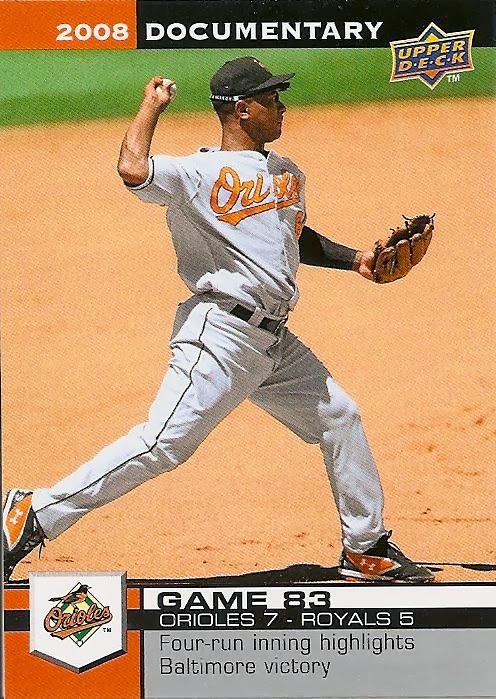 In some ways, I think it's fitting that the slapdash, bloated Documentary set was one of the last products Upper Deck released before they lost their MLB license. Really, who wants to be bothered with a 4,890-card set? Even if you're just aiming for your own favorite team, you've got 162 very similar-looking cards to chase. In the case of the Orioles, that's 162 cards featuring a rotation of just nine players. Lame, lame, lame.

But enough lamentations about this cruddy product. Let's go dumpster-diving in that 2008 O's season and discover the hidden wonders of Game 83. This was another one of their "tread water until late summer, then everything goes to hell" seasons. Thus, the Birds were a passable 42-40 entering their Tuesday, July 1 contest at home against Kansas City. Baltimore jumped all over K.C.'s rookie starter Luke Hochevar with six runs in the first three innings. A pair of two-run singles by Ramon Hernandez and Adam Jones comprised a four-run third inning. Meanwhile, Oriole starter Radhames Liz put up a pitching line that seems typical of his usual effort, to my memory: three runs on seven hits (including two homers) in six innings. He got the win, Adam Loewen earned a hold with a couple of scoreless innings in relief, and Dennis Sarfate...nearly screwed the whole thing up. A Brian Roberts solo home run in the seventh inning had pushed the lead to 7-3, but Sarfate walked two of the three hitters he faced in the ninth and gave way to closer George Sherrill. Ol' Flatbrim did his usual tightrope act, notching out number two on a grounder to first that put the runners in scoring position and then yielding a Mark Grudzielanek single that brought both men home and sent the potential tying run to the on-deck circle. George rallied to strike out Alex Gordon and notch his 27th save.

Oh, and Melvin Mora? Oh-for-3 with a walk and a run scored, making him about the ninth or tenth most valuable Oriole in the game. Which brings me back to my original point...what bozo put this set together?
Posted by Kevin at 10:02 PM