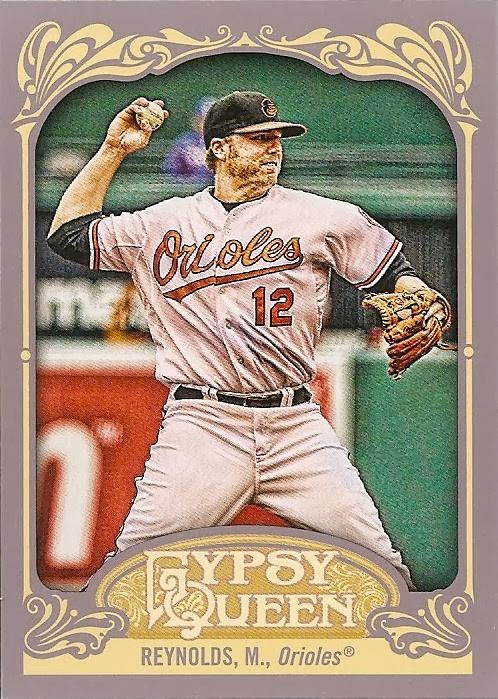 I don't know many card collectors who get excited about Gypsy Queen, with its drab borders and beginners' Photoshop filters. So it was only mildly surprising to see several packs of 2012 GQ sitting in a $1.59 markdown box at our local Target this evening. I picked up five packs, just to indulge my curiosity. Two of the packs featured four of the same cards (out of six total per pack), which is some shoddy collation. But I did get a few nifty cards, including Rollie Fingers and Mark Reynolds. The Birds' former "Sheriff of Swattingham" (hey, I didn't pick that nickname) just signed a minor league deal with the Brewers this week. It's a long way to fall in three years; it was as recently as 2011 that Reynolds led the O's with 37 home runs and posted a 116 OPS+. I can say that I'd rather have seen the Orioles bring him back as a potential platoon DH, instead of some of the castoffs that they've gathered this offseason. Delmon Young? My blood runs cold.
Posted by Kevin at 10:15 PM

While a minor league contract is not ideal and does indicate a drop in Mark Reynolds' value, I wouldn't expect to see him playing in Nashville. It seems more and more teams are signing established players to minor league contracts because they don't want to clear a 40-man roster spot (and possibly lose a potential low-priced young players) until they know that the new guy can actually do the job.

As for the Orioles' acquisitions, I keep telling myself that Duquette is just waiting out the market, but it would be nice if they got SOMEBODY.