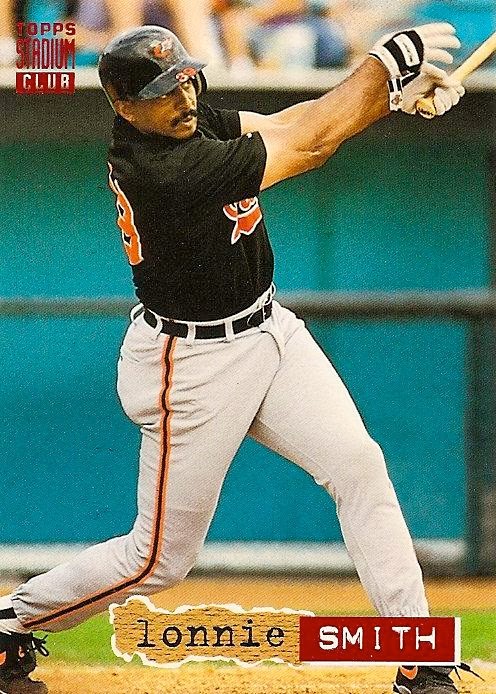 Sometimes you come across a story or a quote that makes you go, "Say WHAT?". That happened to me this morning when I was reading what Night Owl had to say about Lonnie Smith on his 1985 Topps blog. He included a link to a 2006 article about Smith from the Columbia, SC newspaper The State that detailed some of "Skates"' darker moments dating back to his famed cocaine addiction in the early 1980s. The outfielder had cleaned himself up with 30 days in a rehab clinic in 1983, but was not on good terms with Royals' GM John Schuerholz near the end of his time with Kansas City (1985-1987). He got the impression that Schuerholz disliked him for his high salary and did not believe that he had gone drug-free following the rehab stint, and accused the GM of badmouthing him to other teams in the league when he found himself without a job early in 1988. Lonnie was so upset, he entertained thoughts of murdering Schuerholz:

“If I couldn’t get back to baseball,” Smith says, “I was going to take him with me. I was going to fly out there, wait for him in the parking lot of the stadium and pop him. If I got caught, I got caught. If not, I’d come on back home.”

He got as far as purchasing a Taurus 9mm handgun from a pawnshop near his home in Spartanburg, SC. But Lonnie was a novice with firearms, and his first practice shot in his back yard left him with a cut on his right hand; he'd held his thumb too high and the hammer snapped back onto it. The following week, he had yet to put his destructive plan into action, and he buried any thought of it when then-Braves GM Bobby Cox called and offered him a contract. As fate would have it, Smith made the most out of his fresh start in Atlanta, and was still on the club in 1990 when Cox left the front office to become the Braves' field manager...appointing John Schuerholz as the new GM. Lonnie never did clear the air with his new old boss, but with his second wife Dorothy's help, he tamped down his violent impluses and usually tried to just avoid Schuerholz. It's a wild and fascinating story.
Posted by Kevin at 10:21 PM