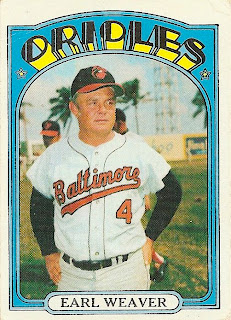 In looking for an Earl Weaver card to post last Saturday, I noticed that I haven't featured any of his vintage cards since 2009. That's far too long to go between classic Earl cards, so here's a great one from the trusty ol' Psychedelic Tombstone set (TM Night Owl). I don't know who's standing to Earl's left, nor what that person might be doing, but they've inspired an expression on the future Hall of Fame skipper's face that seems to say, "Ugh...THIS f***ing guy". As the palm trees and the blurry signs on the outfield fence tell us, it's Spring Training. Though Weaver is wearing his road grays, it's still possible that the team is working out at their Grapefruit League home in Miami.

If I had to venture a guess, I'd say that Jim Palmer is recipient of his manager's withering gaze. The righty probably just told Earl that his elbow is barking, and he thinks he'll have to spend the morning getting treatment in the training room. It's enough to make a guy reach into his custom inner jersey pocket for a cigarette.
Posted by Kevin at 5:12 PM

One of the great managers of his era, along with Sparky Anderson, Dick Williams, (anyone else?)