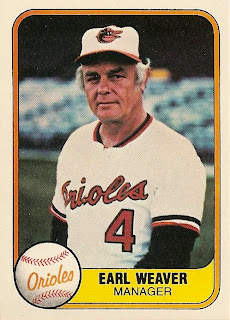 By now you've probably heard that the Orioles family has lost its greatest leader. Early this morning, Earl Weaver died after suffering a heart attack on an Orioles fantasy cruise to the Caribbean. He was 82 years old.

I never had the pleasure of watching Earl manage the O's, but his feats as both a tactician and an umpire-baiter are legendary. The 5'6" skipper was ejected from two consecutive games prior to my birth date, both for arguing balls and strikes. So I'm proud to say that on the day I was born, the newspapers carried stories of one of Weaver's 94 career ejections.

Earl's dirt-kicking, hat-spinning, finger-pointing tirades shouldn't overshadow his managing acumen. Number four was at the helm of the Birds for 17 seasons, and he didn't have a sub-.500 club until he was pulled out of retirement and handed an aging, subpar collection of talent in 1986. Overall, Weaver won 1,480 games and lost 1,060 for an excellent .583 win percentage. Though his teams were unlucky in the postseason, he did take Baltimore to four World Series, including three straight from 1969 to 1971, and he got his lone championship in 1970. He got his proper recognition in 1996, when he was inducted into the Baseball Hall of Fame.

I still need to read "Weaver On Strategy" someday, the ahead-of-its-time book that lays out Earl's strategic philosophies. He's well-known for putting an emphasis on reaching base by any means necessary, as opposed to the traditional mindset that walks were somehow sub-optimal. He just wanted to make sure that there were ducks on the pond whenever one of his hitters was able to get a hold of a pitch: his famous credo was "pitching, fundamentals, and three-run homers". Unlike many of his contemporaries, Earl also harbored a disdain for "small ball", saying that "I've got nothing against the bunt ...in its place. But most of the time, that place is at the bottom of a long forgotten closet."

But the Earl Weaver quote that's probably being bandied about the most today is darkly fitting:

"On my tombstone just write, 'The sorest loser that ever lived.' "

May you rest in peace, Earl. Thanks for the years of excitement and laughter that you brought to my city.
Posted by Kevin at 8:56 PM

I read somewhere today that Weaver was ejected from both games of a doubleheader more than once. On one occasion, his ejection from game #2 came before the game even started!

Jim - This is true. He also once tore up the rule book and scattered it on the field.