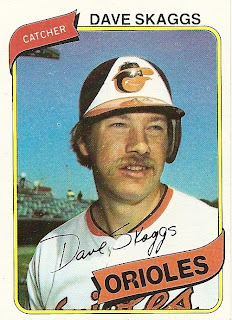 Things you may not know about Dave Skaggs:

-Was the last Oriole to wear #8 before Cal Ripken, Jr.

-Hit his first career home run in the final game of the 1977 season, off of Rick Wise of the Red Sox. He would hit just two more longballs in total, and one of those was also against Wise!

-Is not related to musician Boz Skaggs.

-One anagram for David Lindsey Skaggs is "Salvaged Giddy Skins". Hmm.
Posted by Kevin at 11:55 PM

The bird on his helmet looks a bit wonky too.