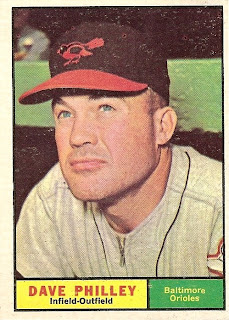 I was stunned to learn that Dom DiMaggio, a seven-time All-Star center fielder for the Red Sox and the younger brother of Joe DiMaggio, passed away this morning. It was one of those weird cosmic coincidences, in that just yesterday I was learning about Dom's career by reading David Halberstam's book Summer of '49 and had given him a mention on my 1965 Topps blog. Speaking frankly, I was also a bit surprised that he had still been alive until today; 92 years is a long life by any standard.

So I got to thinking: who is the oldest living ex-Orioles player? After poring over the team's rosters from 1954-1964, the dean of the Birds is none other than pinch hitter extraordinaire Dave Philley. He was born on May 16 (my grandmother's birthday) in 1920. God willing, he will blow out 89 candles on his cake a week from tomorrow. A switch hitter, he made his major league debut with the White Sox in 1941, just in time to lose four years of his career to service in World War II. In an early indicator of his longevity, he still played in the big leagues for parts of eighteen seasons, retiring at age 42 after playing 38 games in 1962 with the Red Sox. He earned a spot in the record books in 1959, when he hit safely in his ninth consecutive appearance as a pinch hitter. He was a favorite of manager Paul Richards and had two stints with the O's. In the second half of the 1955 season, he hit .299 in his first go-round in Baltimore and was named Most Valuable Oriole. In 1961, his final season in Charm City, he set American League records with 24 pinch hits in 72 tries (.333 AVG). Today, he still lives in his hometown of Paris, Texas.

Congratulations on a long and remarkable career and an even longer life, Dave!
Posted by Kevin at 11:21 PM

Dave Philley was also extremely afraid of flying and played in the era of baseball westward expansion.

He went from being able to ride on trains for all the teams travel at the beginning of his career to a time when they were more dependent on flying via early commercial travel.

how is it possible Dave Philley only played 213 games for the Phillies? shouldn't he have gotten a lifetime contract?

I wonder if there are any other players who match team names? You know a Bobby Athletic or a Steve Metropolitan. I will have to think about this at a better less beer soaked moment.

deal - I had no idea! I imagine that made things tougher on him.

Max - Well, Johnny Podres played for the Padres late in his career...