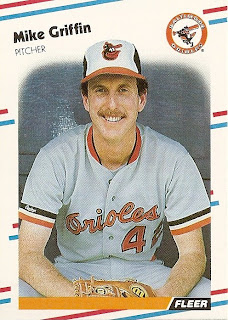 I would wager that Mike Griffin is one of the most anonymous pitchers in Orioles history. He's got the complete package: totally generic name, a resume that includes five teams in parts of six major league seasons, and a grand Baltimore total of 23 games for a lousy 1987 club. That season saw a league-wide offensive explosion, and the Birds were so desperate to find pitchers that could get a few guys out (5.01 team ERA and a league-worst 226 HR allowed), they called out to the 30-year-old Griffin, who hadn't seen any major league action since 1982. The journeyman wasn't awful, winning three and losing five with a 4.36 ERA that was actually a bit above league average. Among O's pitchers with at least fifty innings in 1987, Mike was third in earned run average. Still, he was back in Rochester in 1988, and took no part in that debacle.

Mike Griffin is molding the minds and arms that the Orioles are counting on to bring them back to the top of the American League. I'm sure you would have guessed it just by looking at him (or his card) twenty years ago.
Posted by Kevin at 11:03 PM