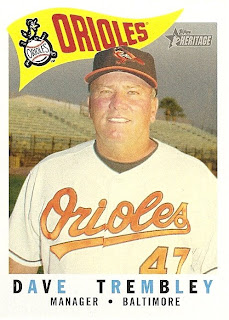 I was listening to a Bill Simmons podcast on ESPN recently, and he was lamenting the lack of colorful, imaginative baseball nicknames these days. I couldn't agree more. We've gone from "Three-Finger" Brown, "The Big Train" Walter Johnson, and "The Georgia Peach" Ty Cobb to "A-Rod", "K-Rod"...ugh. I can't continue. If I have my way, at least one team will have a solid set of nicknames. I'll hit as much of the O's roster as I can, giving credit wherever it may be due.

Aubrey Huff - I've heard "Huff Daddy", but that's a bit dated, don't you think? I'm going with "Hack", because I think he looks like actor David Morse. Besides, it's been a while since Hack Wilson. I'm bringing it back.

Cesar Izturis - The Kaiser. Sure, he's not German, but there's gotta be some wordplay with Cesar/Caesar.

Melvin Mora - On Camden Chat, he is often known simply as MelMo or even Memlo, an intentional mangling. Memlo kind of rolls off the tongue, actually. Alternatively, I always thought he was shaped oddly, kind of like a duck. The Spanish for duck is "pato". El Pato, maybe?

Nick Markakis - Keep it simple. He's Markickass. I even saw it on the back of a #21 jersey a fellow fan was wearing at Camden Yards.

Adam Jones - His family and teammates call him Jonesy, which is all good and well...but I'm partial to Dr. Jones, per the folks at Camden Chat. He's every bit as dashing and adventurous as Indiana Jones, after all.

Ty Wigginton - He followed Aubrey Huff to Tampa Bay, Houston, and Baltimore, so Huff jokingly referred to him as his "fat male stalker". I just can't top that.

Jeremy Guthrie - Guts is short, sweet, and to the point. I've seen the nickname used at both Camden Chat and The Loss Column.

Koji Uehara - The Osaka Kid. Yeah, he's 34, but I saw footage of him happily goose-stepping around the clubhouse in cowboy boots, courtesy of Jamie Walker.

Brad Bergesen - Bergemeister. Sure, that's the second German-sounding nickname. What do you want? My last name is Brotzman.

Mark Hendrickson - Based on his first professional career, I vote for The Poster.

Danys Baez - Cohiba. He's Cuban, and for the time being, he's throwing smoke.

Chris Ray - I've got nothing. He's from Tampa, attended the College of William and Mary (go Tribe!)...suggestions?

Jim Johnson - I believe this one came from the Loss Column: Bandsaw. There was a Baltimore Sun column about Jim's interest in carpentry. It works, considering the way his sinker cuts through opposing hitters.

George Sherrill - Well, I thought the consensus was Flat Breezy, but at Camden Yards he seems to be the Brim Reaper.

That's everyone I have the energy for at the moment (sorry, Lou Montanez and Dennis Sarfate). You can probably do better, so please have at it!
Posted by Kevin at 11:22 PM

Hi, i'm new on yor blog, ang i thik it's very cool. I live in Spain, but i'm from Venezuela. Just want to tell you that i think that MelMo won't be pleased if you call him "El pato" because in Venezuela this word also mean faget.
GReetings

Anon. - Thanks for the explanation - yikes! I suppose we'll stick with MelMo/Memlo.