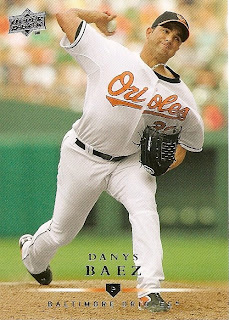 Okay, I'm back from Baseball Oblivion. While it's nice to get away from the siren song of the Internet and cable TV for a couple days with a good book and a stack of DVDs, there's sort of a helpless sense of disconnect when it comes to the Orioles. I'm always frustrated by the shortcomings of the local news programs in northeastern Pennsylvania, where sports coverage centers on Yankees and Phillies highlights before jumping off the deep end with high school sports or NASCAR or something else that I'm not used to seeing as a focal point. I spent this past weekend searching (mostly in vain) for so much as a scrolling score. I missed out on news of Friday's game, but did learn the bare minimum of Saturday and Sunday's contests well after the fact: Orioles 2, Nationals 1. Nationals 8, Orioles 5. However, early Saturday evening I went out with my family for dinner, and we came far enough down the mountain to drift into cell phone range, so I hungrily gathered all of the details about one of the most exciting and improbable wins the O's will have all year.

First, I saw that I had a voicemail from Ed, a frequent reader of this blog and trading partner. In his message, he mentioned that he was in a good mood thanks to the Birds breaking their losing streak. My curiosity piqued, I sat in the restaurant and used my phone to connect to espn.com so that I could read the game story. Each paragraph brought better news than the last. Danys Baez earned the win by pitching two scoreless innings...AND scoring the winning run after reaching base with a two-out infield hit that died 30 feet from the plate? George Sherrill closed it out with a 1-2-3 frame? Rich Hill had a second solid performance to start his Orioles career? Matt Albers pitched well after taking the roster spot of the released-at-long-last Adam Eaton? Nolan Reimold hit another home run? Hallelujah.

I was sorry to miss the spectacle of Danys Baez (0-3 in his eight-year career heading into Friday's game) somehow making contact while simultaneously backing out of the batters' box, then running to first like a man possessed. That's the kind of bizarrely hilarious thing that is bound to happen sooner or later in a 162-game season. Dave Trembley's got a short bench and his hands are tied, and he's sending a relief pitcher to the plate and telling himself that he'll at least be able to turn over the lineup for the top of the thirteenth, provided the game lasts that long. The next thing you know, the desperation move has ignited the game-winning rally, and a four-game losing streak is history.

I missed it in real time, but you'd better believe I tracked down the video (skip to about 7:46). What the heck, how about a little photographic evidence as well? You don't see this sort of thing every day.

Congrats! Danys was supposed to be a Tribe savior... I think I have an auto's rookie card of his somewhere...

David - The road to hell is paved with would-be team saviors, eh?