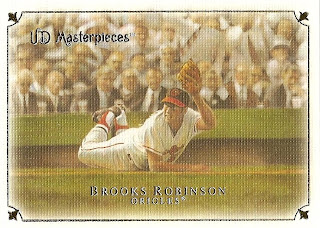 Shocking news today, as Brooks Robinson disclosed that he had recently undergone treatment for prostate cancer. He was speaking in Baltimore at a luncheon for the American Cancer Society, and thankfully the news was good. His condition was diagnosed early and he underwent a series of 39 radiation treatments. The 71-year-old Hall of Famer says that he's perfectly healthy now, and is glad that he was so conscientious about his health. I'm certain that thousands of Orioles fans - and baseball fans in general - are even more relieved than he is. I've never heard of someone who met Brooks and didn't come away impressed by his friendliness and candor. In recent years, Baltimore has lost too many of its baseball heroes: Dave McNally, Hank Bauer, Elrod Hendricks, Mark Belanger, Steve Barber. It sounds like "Hoover" will be around for several years to come, as it should be.
Posted by Kevin at 11:48 PM

This is an incredible card. I don't pay a lot of attention to the new cards of retired players, but this is fabulous. I am curious if there were any other Orioles in this set and what they showed.

I agree - what a fantastic card. It's crazy to think how many great third basemen where playing at the same time. With Mike Schmidt, George Brett and Graig Nettles. You know there are only 13 3rd basemen in the Hall of Fame. I don't know about you but I find this staggering.

Tim - There are three Cal Ripken cards in the set. Here's one of them. Here's another. And the third.

Big D - We're in agreement. Certainly, Ron Santo deserves to be there.

Very sobering post, Kevin. I had only heard about Brooks' medical condition this morning. He, along with Johnny Unitas, were my idols from childhood. My son is named Brooks Robinson Andrews and we've been fortunate enough to have been acquainted with Brooks through the years.
My Aunt forwarded a news clipping to him when my twin boys were born (the other is named for Jim Palmer) and Brooks tracked her down to get our address and sent pictures and a nice letter, unsolicited.
Here is hoping for many years of good health for Brooks.

"Brooks never had a candy bar named after him. In Baltimore, people named their children after him." - Gordon Beard

In a group of family portraits hanging in my house is a picture of my mother posing with Brooks Robinson in a convention in Baltimore. The smile on Brooks' face is so genuine more than one person in our home has asked "is that your dad?" I could only wish.

I saw Brooks Robinson at the Macaroni Grille in Cockeysville last Friday. I was too embarrassed to ask him for an autograph. It's funny, because my friend who was with me knew him as a family friend, and was really trying to get me an autograph. I passed. Dang.

As a White Sox fan, always been a huge fan of Brooks since the early 70's. I f I see any new Brooks cards out I pick them up for the Brooks collection. Got a lot of respect for all the early 70's O's!!