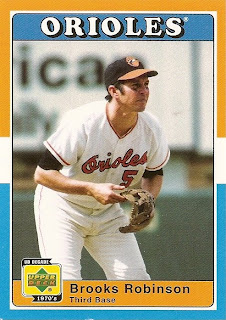 Today (May 18) is a big day for birthdays in the Orioles universe. The following former Birds are hopefully all celebrating with cake and beer tonight:

Of course, the most notable O's birthday today is third baseman Brooks Robinson, who blows out 72 candles! Just last week, I talked about #5's recent treatment for prostate cancer, and the volume and tone of reader responses was a reminder of just how much Brooks has meant to the Orioles, their fans, and the city of Baltimore in the fifty-five years since his major league debut. You've cheered his on-field exploits, corresponded with him, met him face-to-face, and even named your children after him. He has experienced and witnessed the practical entirety of the O's existence, from Paul Richards and Gus Triandos to Earl Weaver and Jim Palmer to Eddie Murray and Cal Ripken, Jr. to Brian Roberts and Nick Markakis. Really, if you think about it, May 18 should be a local holiday. It's too late to do anything about it this year, but we can all start preparing our excuses to miss work the next time around!
Posted by Kevin at 9:39 PM

My brother is an Orioles fan. His birthday is May 18th, same as Brooks.

When we were kids, we went to a card show in which Brooks Robinson was signing autographs. My brother stood in line, and when he got to Robinson, he told him that they shared the same birthday.

Robinson looked at the man he was with and said something like, "another one," in a disbelieving tone.

That ticked my brother off for years.

Many happy returns Brooks. A living legend if ever there was one. One of the true greats.

Night owl - Sorry to hear that! Maybe it was Brooks' evil twin Skroob...wow, I just stumbled into a Spaceballs reference.