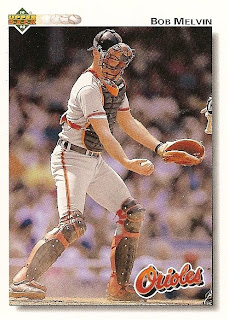 In this photo, Bob Melvin looks like he's preparing to punch somebody in the groin. Fast-forward to 2009, and he probably feels like doing just that. It was just announced that the Arizona Diamondbacks have fired Bob as their manager after four-plus seasons. In 2007, he was Manager of the Year for guiding the club to 90 wins, a National League West crown, and an NLCS appearance. A year and a half later, the D'backs are 12-17 and nine games behind the Dodgers, so he's a bum. I suppose you know the breaks when you agree to take a managing job, and baseball skippers generally have more job security than their counterparts in the other major professional sports in this country. Still, if you see Bob Melvin in your travels this weekend, be sure to buy him a beer. It probably hasn't been a great week.
Posted by Kevin at 10:51 PM