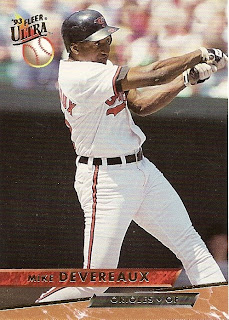 When I became an Orioles fan in 1993, I took a quick dislike to Mike Devereaux. Looking back, it's almost hard for me to remember how Devo became the first in a long line of my personal whipping boys. It probably didn't help that he was fresh off a breakout season in which he'd hit .276 with 29 doubles, 11 triples, 24 home runs, and 107 RBI. Expectations were high, but the outfielder had a down year in '93. He hit .250 with 14 HR and 75 RBI, and missed 31 games in total. It's possible that I could have personally seen a few games in which he made high-profile mistakes and they made a lasting impression upon me. Certainly, his awful 1994 season didn't do anything to disabuse me of my animosity toward him (.204, 9 HR, 33 RBI in 301 AB). An ugly beaning at the hands of Cleveland's Chad Ogea did nothing to help him, of course.

The following season, he wound up hitting .299 with the White Sox and the Braves, and was the unlikely MVP of the National League Championship Series (.308, 5 RBI in 4 games). He proceeded to return to the O's in 1996, just in time to stop hitting well again (.229, 8 HR, 34 RBI), capped off with a hitless postseason (0-for-3). My dodgy relationship with Mike Devereaux continued unabated.

But Devo was a fine Oriole in the big picture. He was a gifted athlete, and his speed helped him to play an exciting center field (though he wasn't much of a base stealer). He put together back-to-back years with double-digit doubles, triples, and home runs (1991-1992), which you don't see much. He also holds a few major league records for players born in Wyoming: most triples (33), home runs (105), and RBI (480). That counts for something, doesn't it?
Posted by Kevin at 11:53 PM

Growing up I had a friend who called him Mike "Dev-a-rex." I never really liked him or Mike Devereaux.

Devereaux was the man.