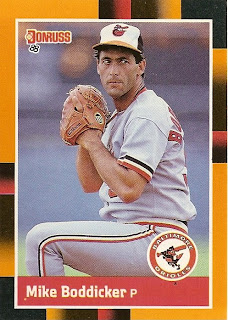 When I posted Jose Bautista's 1988 Donruss Rookies card last weekend, reader Jeffrey observed that the dark, murky blue-bordered base set would have looked better in green. It made me think of this card and several others like it that I recceived in two separate trades last month. I don't know much about Baseball's Best, except that it's a 336-card set, so it's barely more than half the size of the regular Donruss issue. All of the cards in the set feature this bright orange border, which of course is an awesome fit for the Orioles. The cards are glossy, much like the Rookies set but unlike the drab regular set. The card backs are a golden yellow and vertically oriented with full career major and minor league stats, unlike the blue, horizontally oriented, last-few-years statline card backs in 1988 Donruss. Even the photography seems clearer, more dynamic, less shadowy than usual. It's amazing to me that Donruss could put out a set that was, with a few tweaks, leaps and bounds beyond its now-universally-panned 1988 release. They put out similar, but less-impressive (in my opinion) sets in 1989 and 1990, as well.

Why am I just discovering this set now? Why is there so little information about it online? Was it meant to be a hobby-exclusive or Tiffany-type set, for the distinguished collector? If so, they must have still fallen victim to disinterest and/or overproduction. I found one site selling sealed factory sets for $12. Well, I for one am going to spread the word about Baseball's Best, though your mileage may vary.
Posted by Kevin at 8:37 PM

The baseball's best had nice gloss too. You know the more I think about it '88,'90 and '91 Donruss would have benefited greatly from team colored borders, better photos, high gloss and full stats. They might be still around if they did.

quite the opposite...the baseball's best sets were sold as complete sets in stores like woolworth's and they were not going for the hobby elite. score has similar 100 card superstar sets around the same time. they were classier than fleer box sets, but they were hardly high end.

Max- Thanks! I knew one of you guys would have the scoop.

an early popular sammy sosa card, one of the few from 1989, was in the 1989 donruss baseball's best. and i know how much you orioles fans love sammy.

I have a complete set of the 88 Baseballs Best for an extremely reasonable price up in the link above. It comes with many other great cards!!!

FYI I remember buying this set at K-mart. At the time I was more into just collecting the "regularly" released cards for each year. I was mainly a Donrusss/Topps kid.