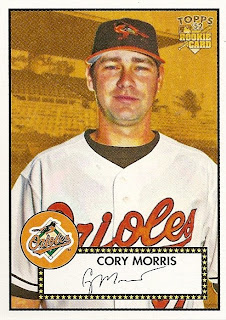 The back of this card tells of a simultaneous high and low in Cory Morris' career. In 2006, the Orioles recalled him from AAA Ottowa on April 9. He was 27 years old and in this, his sixth professional season, he finally got to the big leagues. Three days later, he was sent back down, not having appeared in a single major league game. He did not pitch in affiliated baseball after that season. I wonder how it felt to have worked for over half a decade, riding buses and sitting in dingy minor league clubhouses, and thinking that it's going to pay off, only to have it all taken away without even facing a batter. Would it still be worth it, just to get a glimpse of the big leagues and to meet Miguel Tejada, Brian Roberts, and the other Orioles? Will he still tell his children and grandchildren about it?
Posted by Kevin at 11:53 PM

The bigger question is - does he merit inclusion on your NumerOlogy site? Despite never appearing in a game, he was a member of the club for 3 days. The trick will be finding out his number. I did find one ESPN link which listed his number as "39" - which would be consistent with this card.

Tim, a very good question indeed! If he was ever on the roster in the regular season, he goes on the website. I've included a few other DNPs that I am aware of, including Bruce Dostal and Mike Willis. Cory may well have been #39 - no one else wore it in 2006. I'll add him to the site soon, most likely.