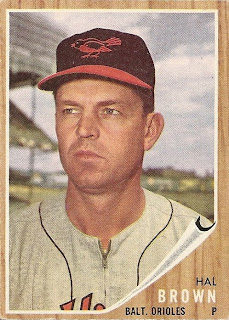 Check out the wary look on Hal "Skinny" Brown's face there. He's eyeballing someone to his right, probably some callow rookie who's making faces at him and trying to get him to crack up in front of the camera. Hal's been doing his thing in the big leagues for eleven years; he's thirty-six now. "I'm getting too old for this s#!%."

Hal Brown just got better with age, though. In the three seasons prior to the issue of this card (1959-1961), he ranked in the top ten in the American League in walks and hits per inning pitched. He'd also placed in the top six in earned run average for 1960 and 1961. He was a rock of veteran strength on a team full of fresh-faced young hurlers like Milt Pappas, Steve Barber, Jack Fisher, and Chuck Estrada. But as you can tell from Hal's expression in this photo, he probably wanted to wring their necks now and then.
Posted by Kevin at 11:58 PM

You can't see it but Hal has on an shirt that sez: "Baltimore". And the best Oriole story in years is that they are returning the city's name to the road jerseys!! way overdue I'd say.

Agreed, Bob! I plan to cover this later this week. It's starting to sound like the O's brass get it...scary, huh?