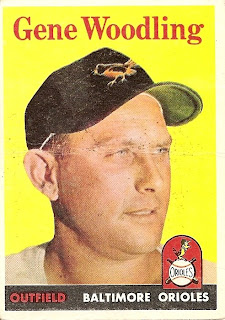 A lot changes in fifty years. The year this card was made, the Boston Red Sox still had not integrated; Pumpsie Green would become their first black player in 1959. The Dodgers and Giants brought Major League Baseball to California. Dodgers catcher Roy Campanella was left paralyzed in a career-ending car accident. There were eight teams each in the American and National Leagues. The Yankees downed the (Milwaukee!) Braves in an exciting seven-game World Series. Believe it or not, Cal Ripken, Jr. hadn't even been born yet.

The NFL's Colts were the toast of Baltimore and the country, putting pro football on the sporting map by winning a televised sudden-death championship game over the Giants that would be dubbed "The Greatest Game of All Time". Of course, fifty years later those Colts are in Indianapolis and the team with the most rabid fan base in Charm City is undoubtedly their replacement, the Ravens. Most people would say that this is a football town. My own gridiron-crazed uncle all but rolled his eyes at me last Sunday when he noticed that I was wearing an Orioles shirt. But having just come home from a very lively (and very unseasonably cold) Oriole Park at Camden Yards, basking in the glow of yet another comeback win, I believe that Baltimore has the will to be a baseball town once again.
Posted by Kevin at 11:27 PM