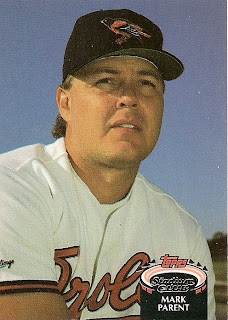 Alright, I feel like testing my own knowledge today, so I'm flying without a net. Let's see if I can pull Ten Fun Facts about former backup catcher Mark Parent from memory:

1. Former Orioles radio announcer Jon Miller used to talk about ex-hockey player Bernie Parent whenever Mark was in the game, even though the pronunciations were different (puh-RENT vs. PAIR-int).

2. One year, the Birds designed Parent for assignment at the end of Spring Training. He was so discouraged, he thought about refusing the assignment to AAA Rochester and becoming a free agent. However, former Cubs teammate Rick Sutcliffe convinced him to stick around, and he got the callup later in the season when the club was shorthanded behind the plate.

3. In addition to the O's, Mark also played for the Padres, Cubs, and Pirates, among others.

4. In 1996, Mark suited up for the Orioles for the first time since 1993. Other former Birds that returned to the team that year were outfielder Mike Devereaux (last seen in 1994) and second baseman Billy Ripken (last seen in 1992).

5. That 1996 club broke the 1961 Yankees' record for total home runs. On a team with heavy hitters such as Brady Anderson, Rafael Palmeiro, Bobby Bonilla, and Cal Ripken, Jr., it was Mark Parent who hit the record-breaking homer.

7. Okay...I'm stuck. But you have to admit, six facts about a journeyman catcher who totaled 57 games in three seasons in Baltimore isn't bad. Just so no one feels cheated, here are some more facts about him:

8. He managed the independent Lancaster JetHawks in 2000.

If I were you, this post would've looked something like this:
7. Mark has brown eyes.
8. Mark has brown hair.
9. Mark weighs over 100 lbs.
10. Mark celebrates his birthday every year.

Hey! It's one of the cards I sent you! I'm glad you like it.