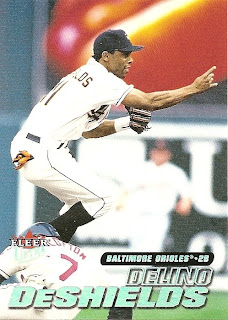 There's a lot to see in this action shot from 2000, a season in which Delaware native Delino DeShields put up some of the best offensive numbers of his career (career-highs: .296 AVG, 86 RBI, 43 2B). He's leaping over Indians outfielder Kenny Lofton, who barrels into second base trying to break up the double play. Delino has just fired off the relay throw to first, and his pinkie and index fingers are extended as if he's giving the O's first baseman a heavy metal salute. Meanwhile, the exceptionally blurry right fielder jogs in place, attempting to look busy.

But the most amazing thing about this scene is that DeShields is going about his business on the field with a cool and calm demeanor even as the grim spectre of a giant Esskay hot dog lurks in the background. The frankfurter bides its time, moving a little closer and then closer still, its glacial movements imperceptible to the human eye. Soon, it will make its play and attempt to devour Delino whole. That, my friends, is why I eat hot dogs. It's all about the food chain; you have to eat them before they eat you. Kind of like those old Fruit Sharks gummi snacks.
Posted by Kevin at 3:59 PM