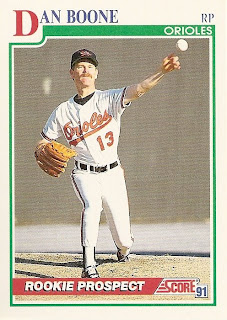 There's something I really admire about baseball players who take advantage of every opportunity to play the game, no matter how far removed it might be from the major leagues. To me, it speaks of an unquenchable love for the game. Besides, you never know where it might lead. Jim Bouton famously returned to the semi-pro diamonds a few years after the backlash from Ball Four helped to blackball him from the bigs. As a knuckleballer, he knew that he still had enough in the tank to pitch at the highest level, and got none other than maverick White Sox owner Bill Veeck to give him a shot to work his way up from the minors. He didn't get very far, but decided to push on for one more year with another club. That would be Ted Turner's 1978 Atlanta Braves; at the age of thirty-nine he won eleven games at Savannah before getting the callup. Eight years after throwing his last pitch in the major leagues, he held his own, even picking up a three-hit, six-inning win over the Giants.

Dan Boone, who is actually a seventh-generation descendant of the famous frontiersman of the same name, was similarly irrepressible. He was drafted by the Angels in 1976, but didn't sniff the big leagues until 1981. Then a 27-year-old rookie with the Padres, he made the most of his opportunity, crafting a nifty 2.84 ERA. He allowed just two home runs in 63 and one-third innings of relief. Boone struggled the following season as both a Padre and an Astro, appearing in only twenty games with a 4.71 ERA. He wouldn't make a major league roster in 1983 or 1984, and when the Brewers released him during the latter year, he found himself OOB: out of baseball.

There's not much information out there concerning the next five years of Dan's life, but he resurfaced in pro ball in 1989. That was the inaugural year of the ill-fated Senior Professional Baseball League, a winter league for thirty-to-fiftysomethings in Florida. The thirty-five-year-old Boone returned wielding a veteran pitcher's best friend, the knuckleball. He went 4-3 with a 3.16 ERA, at which point the Orioles came calling. He spent much of 1990 at Rochester, ranking seventh in the league in ERA and pitching a no-hitter. According to the back of this card, Boone said that he "had to fight back the tears the last three innings". In mid-September, he accomplished the improbable, following Bouton's lead by returning to an MLB mound after an eight-year absence. He fared pretty well, yielding three runs in nine and two-thirds innings.

Perhaps realistic about his chances of sticking around (even with a team as mediocre as the early 1990s O's), Dan Boone returned to the Senior League that winter. He was even better than he'd been in his first go-round, racking up five wins in six decisions with a scant 1.85 ERA. Unfortunately, the league folded in midseason with Boone leading the circuit in wins.

You won't be surprised to hear that Dan's story doesn't end there. According to this site, he also pitched in the San Diego iteration of the Men's Senior Baseball League, an organized amateur league, between 1989 and 2002. That would have made him forty-eight when he finally hung up his spikes. But in between, he took one more last gasp shot at the big time. You might remember the gruesome spectacle of Spring Training 1995, when the owners attempted to force the striking players' hands by opening camp with replacement players, a motley collection of minor leaguers and retired fringe players. With nothing to lose, there was Dan Boone, pitching in a Padres uniform at forty-one years of age. Of course, the strike was settled and Boone was one of the many fill-ins who was sent packing. But Dan Boone was a guy who made the most out of every opportunity in his career, to say the least.

As a final note, you have to love the audacity of Score to slap a "Rookie Prospect" tag on a card for a player who pitched in fifty-seven major league games prior to 1990. I'm pretty sure your rookie eligibility doesn't grow back after a certain amount of time.
Posted by Kevin at 10:04 PM