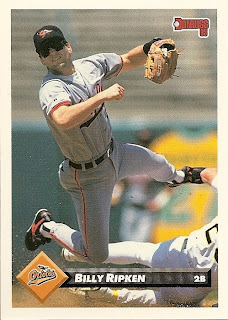 From day to day at the stadium, I mostly kept to myself. I can be shy in some environments, and I felt like something of an outsider, especially when my outgoing and engaging boss suddenly quit a few weeks into my internship. After an initial bit of uncertainty, I learned that I'd be kept around, seeing as how I'd already started preparing the multimedia reports that had to be presented to each of the IronBirds' sponsors. So I became a fly on the wall, privy to the daily wit and wisdom of Billy Ripken. Most of the time, he was overly concerned with the thermostat setting, like a stereotypical TV dad. "Who keeps turning up the HEAT?!"

I also got a big, bitter taste of Ripken politics. This was during the 2004 Presidential Election, and I was swept up in anti-Bush fervor. The loudest voices in the office were Republicans. On Election Day, I sat stewing in a quiet cocktail of annoyance and bemusement as Billy shuffled around singing, "Down, down down...Bighead's goin' down." You can probably guess who Bighead was.

The defining snapshot of my experiences with Billy Ripken occurred in the bathroom, of all places. I walked in, stepped up to the lone urinal, and suddenly heard a familiar voice from inside the adjacent stall.

A pause. He continues.

"How's it smell out there, buddy?"

Another brief pause before I offer an answer.

When it comes to one-liners, I'd like to think this is my trump card: Billy Ripken actually asked me if his crap stunk.
Posted by Kevin at 8:51 PM