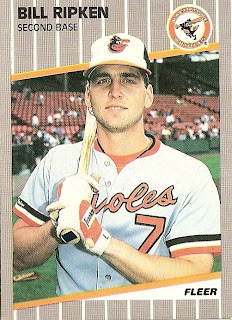 Better late than never. I ended up spending much of the day Saturday with my family, but this story is worth the wait. As many of you have noticed, this is indeed one of the hastily-censored "black box" variations of the card that guaranteed Billy Ripken his own place in baseball history, apart from the shadow of his legendary older brother. I assure you that if I had the R-rated variant, it would be on display here. But I don't, so we'll have to make do.

When I tell people that I spent three months interning for the Aberdeen IronBirds, I'm sure it sounds a little more glamorous than it actually was. Although Cal Ripken, Jr. is the most famous face attached to the team, he was far too busy to be much of a presence around Ripken Stadium. I met him once in my time there, which is a story for another time. But his co-owner, one William Oliver Ripken, was a more frequent sight - and sound - around the office. Though we didn't interact very often, the few occasions when we did have left their impression with me.

My first big project as a marketing intern was to assist with a sponsors' batting practice. One of the big perks given to some of the team's more generous business partners was a day at the stadium for employees and folks from other businesses that they might want to schmooze a bit. On this day it was the folks from Advance Business Systems, whose trippy commercials should be familiar to locals. They'd start off with batting and fielding practice, and wrap up with lunch and an awards ceremony on the luxury suite level. I was a jack of all trades, setting up the locker room with the participants' custom-lettered jerseys and caps, not to mention the nameplates that I had printed, laminated, and cut. Then I chased around all of the participants, urging them to sign waivers (the Ripkens are no dummies). In the process of this task, I spotted the B.P. pitcher himself, took a deep breath, and approached him.

As he shook my hand, he bellowed in a raspy tone of mock-annoyance that would soon become very familiar to me.

"Jee-zus Christ, how many interns does Shelly have? It's like the freakin' Chinese Army around here!"

Indeed, I was aware that the marketing department was chock-full of interns during the baseball season. Now that school had started though, they were all gone. Having just graduated myself, I was the only intern to be found. Not that I'm sure what the Chinese had to do with anything. Is Red China especially known for a robust military internship program? Anyway, he probably asked me a question or two about my high school and college, and I went on my way. During B.P., I stood on the field in foul territory and watched the grownups at play. A few of them were pretty impressive. I seem to remember that one of the guests was a doctor in his thirties who had played college ball and had decent warning track power at the least.

After the field session had wrapped up, I sat in on the meeting of the minds: My boss Shelly, her boss Aaron (the assistant GM), and Billy Ripken. They were choosing "award winners" among the participants: Gold Glove, Best Hitter, and so forth. At one point I suggested a particular award, something with some clever wordplay that I've long since forgotten. Billy sized me up and offered his rebuttal:

"Take it easy, Chinese Army. You just got here."

It seemed that I had earned myself a nickname with the former second baseman. I'm relieved to say that it did not stick.

To be continued tomorrow...by which I mean later today.
Posted by Kevin at 11:14 PM

Aw, don't show us the blocked out version... We want to see the original!

This card is the only thing that kept Billy Ripken from being remembered simply as Cal's younger brother.

Even though we came up short at the end, what a great year for Orioles Magic! That team was truly more than the sum of its parts.

Well, Spike, if I would've had a double of the original instead of the boxed version, I would've sent it to Chine... I mean, Kevin.