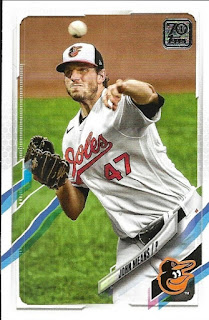 Glad to see your post. I still check every day and had hoped you and the family were safe.
It was a sweet game and great to watch.
Now to add to it all you also have ex Oriole Wade Miley throw a no no a few days later. Both lefty's besides that. Also nice to see.

I just happened to click on on your final entry in your 1965 set blog.

It's unbelievable (and sad) how much crap has accumulated in the comments section on that Ed Bressoud post.

Especially annoying are the people who start off their comment with a token compliment to you, then add their advertising spam links anyway.

After being in relationship with Wilson for seven years,he broke up with me, I did everything possible to bring him back but all was in vain, I wanted him back so much because of the love I have for him, I begged him with everything, I made promises but he refused. I explained my problem to someone online and she suggested that I should contact a spell caster that could help me cast a spell to bring him back but I am the type that don’t believed in spell, I had no choice than to try it, I meant a spell caster called Dr Zuma zuk and I email him, and he told me there was no problem that everything will be okay before three days, that my ex will return to me before three days, he cast the spell and surprisingly in the second day, it was around 4pm. My ex called me, I was so surprised, I answered the call and all he said was that he was so sorry for everything that happened, that he wanted me to return to him, that he loves me so much. I was so happy and went to him, that was how we started living together happily again. Since then, I have made promise that anybody I know that have a relationship problem, I would be of help to such person by referring him or her to the only real and powerful spell caster who helped me with my own problem and who is different from all the fake ones out there. Anybody could need the help of the spell caster, his email: spiritualherbalisthealing@gmail.com or WhatsApp him +15068001647 blog: spiritualherbal.blogspot.com you can email him if you need his assistance in your relationship or anything. CONTACT HIM NOW FOR SOLUTION TO ALL YOUR PROBLEMS

Have you ever heard of second life (sl for short). It is basically a online game where you can do anything you want. Second life is literally my second life (pun intended lol). If you want to see more you can see these Second Life websites and blogs the time to study or pay a visit to the content or web-sites we have linked to 성인야설

"Thanks to my father who shared with me concerning this website, this web site is truly amazing.

Here is my web site 휴게텔"

For latest news you have to pay a quick visit internet and on internet. I found this web page as a finest web site for newest updates.스포츠마사지

For the reason that the admin of this web site is working, no hesitation very quickly it will be renowned, due to its feature contents.출장마사지

According to Blogus, I agree with what you say here. I agree with every single thing you said. Your willingness to tell me what you think and feel has been very helpful. I really hope that a lot more people will try writing like this.

According to Blogwi, I concur with your statement. I concur with everything you stated. Your willingness to share your thoughts and feelings has been extremely helpful. I sincerely hope that many more people experiment with writing like this.

According to Articles Posts, Baseball's dropped-third-strike regulations prevented John Means from throwing a perfect game. He faced 27 batters without a walk, hit, or error. This was MLB's first no-hitter and the Orioles' first since Milacki-Flanagan-Williams-Olson in 1991. It was the Birds' first no-hitter since Jim Palmer in 1969. A former 11th-round choice ended the longest active solo-no-hitter drought yesterday. A May Thursday was well-spent.

According to robots animated movie, I agree with what you have to say because I believe what you say is true. Everything you've said is correct and makes perfect sense to me. Thank you for informing me. I have found it extremely beneficial that you are willing to discuss your thoughts and feelings, and I am pleased that you are taking advantage of this opportunity.