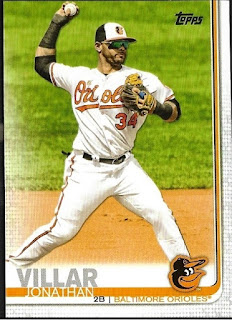 Tonight's late-night entry is blessedly just about baseball and card collecting. What a concept!

Because I didn't post to this blog at all last year, this is the first 2019 card I've featured here. It was also the first Oriole that I pulled from a pack of cards. I wasn't crazy about last year's Topps design; the gray block text for player surnames were pretty dull, and the decision to put the last name above the first name drives me bonkers. To the limited extent that I still buy new cards, I prioritize the Topps Heritage set over the flagship set. God, I really am middle-aged now, huh?

Anyway, a few words on Jonathan Villar. His entire tenure as an Oriole came and went between updates to the blog. He was the only major leaguer acquired in the July 2018 deadline deal that sent a fellow Jonathan (Schoop) to Milwaukee. Even if neither of the two prospects that the Brewers shipped out along with Villar pan out, the O's still won that trade. Schoop, of course, had a forgettable three months in Milwaukee, posting a mere .577 OPS with four homers in 46 regular-season games and going 0-for-8 in the postseason. He was non-tendered the following winter, and Brewers GM David Stearns went so far as to admit that the swap was a "bad deal".

Although baseball is a business, I'll admit that I was bent out of shape when the Orioles chose to non-tender "Villi" in December to save a few million dollars. They ultimately traded him to the Marlins for a minor league pitcher. I'm sure the front office is taking a calculated risk that he won't repeat his strong 2019 performance, but I don't see why they couldn't have kept one of their few big league-caliber players for one more season. Then again, we still don't know if anybody is playing anywhere this year.
Posted by Kevin at 11:53 PM