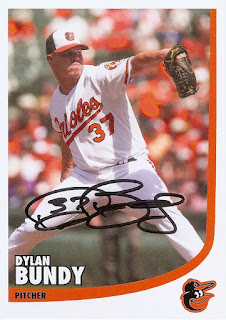 One of the best developments of last season was Dylan Bundy's long-awaited emergence as a starter for the Orioles. After injuries limited the fourth overall pick in the 2011 draft to a total of 65.1 minor league innings from 2013 through 2015, he appeared in 36 games for the O's in 2016. He started out the year in the bullpen and was gradually stretched out before being slotted into the starting rotation in midseason. Considering that it was his first prolonged big league exposure and his first full-length pro season, Bundy held his own. He went 8-5 with a 4.52 ERA in 14 starts, allowing 63 hits and 30 walks in 71.2 innings while striking out 72. When you factor in his relief work, his overall stats were 10-6 with a 4.02 ERA; he actually allowed fewer base runners per inning as a starter (1.30) than he did as a reliever (1.53). It didn't happen the way we expected, but Dylan Bundy finally contributed to a contending Baltimore team.

As we kick off the 2017 season, the O's fortunes are expected to hinge on the performance of their two talented young starters, Bundy and Kevin Gausman. Two games in, and we're trending upward. Gausman, starting the opener in place of the injured Chris Tillman, allowed two runs in five and a third innings against a Toronto team that has hit him hard in the past. Tonight, Bundy was masterful in a 3-1 victory to sew up a two-game series sweep of the Jays. Pounding the strike zone with a fastball-curveball-slider mix, the Oklahoma native held the opposition to one run on four hits and no walks in seven innings. He struck out eight batters, and had five 1-2-3 innings out of seven. No sweat.