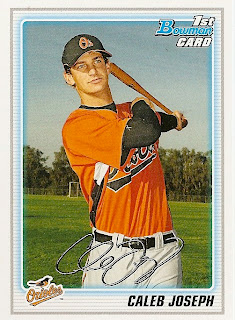 If you don't know who Caleb Joseph is today, there's a chance that you will know him in a few years. The Orioles drafted the catcher out of Nashville's Lipscomb University in the seventh round of the 2008 draft. He flashed decent power with the Aberdeen IronBirds in his first pro experience that year, cracking 19 doubles and 8 homers in 63 games. He further progressed with the Frederick Keys in 2009, batting .284 with 12 home runs and 60 RBI in 103 games. Joseph entered the 2010 season as a top-twenty prospect in the O's farm system, but struggled a bit in his first look at AA Bowie. His average dipped to .235 and he slugged just .368, and he committed too many passed balls and errors.

Caleb should still enter the upcoming season on a high note, though. Baltimore sent him to the Arizona Fall League, where he and several other Birds minor leaguers played for the Scottsdale Scorpions. Yesterday the Scorpions beat the Peoria Javelinas 3-2 to capture the AFL championship. Though he played only three innings in the final game, Joseph led his club (albeit in a small sample size) with a .390 batting average in 12 games.

My God, did they take that picture while he was getting his prostate checked by the team doc?

Anybody interested in looking at this card should check this out:

Cool post Kevin, I started collecting Caleb's cards back in June, and haven't made much progress since then. Maybe someone out there can help me out. http://greatoriolesautographproject.blogspot.com/2010/06/collecting-caleb-joseph.html

William - That's what they get for contracting the team physicals to Dr. Giggles.

Ryans - There you have it: Caleb Joseph is the toast of the Orioles baseball card blogosphere.