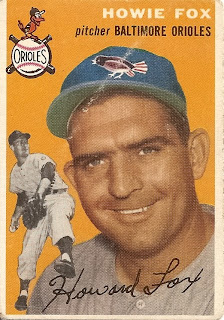 Howie Fox pitched for nine years in the major leagues and sported a gruesome 43-72 won-lost record that included a league-leading 19 losses with the Reds in 1949. He did rebound the following year with an 11-8 mark, but that kind of thing doesn't grab headlines. At the end of his career, Howie had the rare distinction of playing for the AAA International League Baltimore Orioles in 1953 and the MLB's American League Baltimore Orioles the following season. He had won 15 games for the minor-league club, but posted just a single victory in 38 games (mostly in relief) with the big league Birds in 1954. His 3.67 ERA was the lowest among the few regularly-used relievers on the club, but it was not enough to guarantee the veteran a spot on the club a year later. Instead he was dispatched to AA San Antonio, the place where his life would end shortly after the end of that 1955 season.
Fox, weighing the career prospects of a 34-year-old pitcher who's been farmed out to the Texas League, opened a tavern in San Antonio. On October 9, 1955, three men entered his bar and began harassing the bartender. Howie intervened and was stabbed by one of the aggressors. The knife wound was fatal. I was sorry to learn about the tragic and premature ending to his life, but I am relieved that no other ex-Oriole has been murdered to date. Howie Fox is buried at Laurel Grove Cemetery in Springfield, Oregon. For information about his burial site and some photos (including a full-length portrait of him in his Orioles uniform), visit this site.

I recently found Howie's 1951 Bowman card in the two-dollar bin at my local hobby shop. Knowing only that he was an ex-Oriole who was killed in a bar fight (as Wikipedia so unfortunately phrased it), I was intrigued enough to make it one of three cards from the set that I bought that day. It didn't hurt that he was pictured in a Reds uniform, allowing me to add another player/team combo to one of my sub-collections. Now that I've gotten a clearer picture of just how he died, I'm very glad to have this card in my possession and to have the chance to share a bit of his story with you. 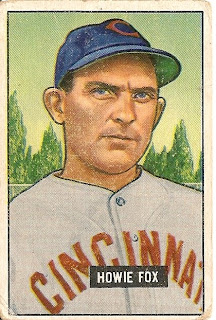 Fascinating story. Thanks for digging it up. I gotta start digging like that.