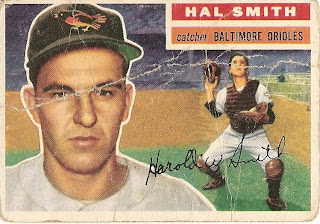 In the terminology of baseball card collecting, one of the more egregious flaws is the crease. But to call this particular card "creased" would be to damn it with faint praise. The imperfections herein are more like fault lines, an indicator of ancient history. How did this 53-year-old piece of cardboard come to be so weathered? I have two theories.

-There were two Hal Smiths who were contemporaries. Harold Raymond Smith was a catcher for the Cardinals from 1956-1961. He was a two-time All-Star and hit a career-high 13 home runs in 1959. His career ended prematurely thanks to a heart condition, so he went into coaching (and was briefly activated in 1965, when he went 0-for-3 for the Pirates). Harold Wayne Smith, pictured above, was also a catcher. His career stretched from 1955-1964 for the Orioles, Athletics, Pirates, Colt .45s, and Reds. His single-season high in homers was also 13, in 1957. He was a better and more powerful hitter overall than his counterpart, but was never an All-Star. Perhaps a youngster who was a fan of St. Louis Smith traded a Yogi Berra for this card, only to realize later that it was the wrong guy. He then crumpled the card in anger before keeping it as a reminder to do his research in the future.

-Hal's moment of glory came in the 1960 World Series, and was almost instantly pushed to the back burner. In the eighth inning of Game Seven, his three-run home run gave Pittsburgh a 9-7 lead over the Yankees. But New York came back to tie it in the ninth, and Bill Mazeroski's game-winning shot in the bottom of that inning gave the Fall Classic to the Pirates and ensured Maz's place in baseball history. Maybe the poor kid who belonged to this card was a Yanks fan, and he took out his frustrations on it. His older brother, a Pirates fan, gladly salvaged the card for future tormenting purposes.

Sure, it's more likely that the card was used as a bookmark, or carried around in someone's wallet as a good luck charm, or stuck in the spokes of a bike. But if you ask me, the two scenarios I've laid out in this space are much more interesting.
Posted by Kevin at 10:59 PM

Even with the creases that's a great looking card

Agreed, that card rocks. I think the creases add to the beauty of it in a bizarre way. It reminds me of the day I traded a couple of pristine Paul Stanley Kiss cards for a dog eared (which is being kind - I think it even had a tiny chunk missing) one of Gene Simmons blowing fire. I didn't care though, I just wanted that card so badly. I was so stoked I ran home from school to show my mother. Ah to be 8 again...

I love that card. Hey check me out at http://balorioles.blogspot.com/

Glad you guys liked it!