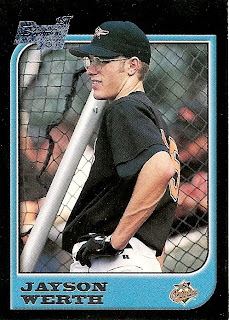 A lot has changed for Jayson Werth in the last decade. Gone are the big round glasses for the Orioles' 1997 first-round pick. He's grown out his hair, both on his head and on his chin. He's made the transition from catcher to outfielder. He's hopped around four different organizations, and is now in his second season in Philadelphia. 2008 was the sixth season that the now-29-year-old has spent at least partially in the majors, but his 134 games were easily a career high, surpassing the 102 games that he took the field in 2005. It's safe to say that this has been Werth's finest all-around season, a campaign in which he accumulated 24 home runs and 20 steals. To top it off, his Phillies are two wins away from their first World Series appearance in fifteen years.

But Jayson is struggling. After a great showing in the Division Series (5-for-16, with all five hits going for extra bases), his bat has gone cold in the NLCS. He managed just one hit in his first eleven at-bats in three games, with four strikeouts. Of course, as I was typing this, he singled with two outs in the ninth inning to temporarily keep hope alive. However, the Phils went on to lose 7-2. Their comfortable series lead has been cut in half, and they'll need Werth, Chase Utley, Ryan Howard, Jimmy Rollins, and company firing on all cylinders in order to hold off Los Angeles. Personally, I'm "in the bag" for the Phillies, as they've gone even longer than the Birds without winning the World Series, and I can't stand Manny Ramirez and the inevitable sports-media overkill that would come with his return to the Fall Classic in a new uniform. (God forbid he should face off against the Red Sox in the Series!)

I agree on the Manny overkill. But I'm a Dodger fan, so mere media overkill won't sway me. (By the way, the anti-spam word verification code that I typed in to send this message had the letters "Cey" in the middle of it. Hmmm. Omen?

That is actually a 1997 Bowman pictured.

I agree with you. If it weren't for Manny I would be pulling for the Dodgers.

Night owl - If the Dodgers pull it out, my consolation is that seeing Torre and Manny winning will stick it to Yanks and Sox fans. Is it healthy to root the way I do? Probably not. ;)