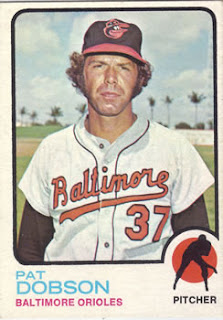 Poor Pat Dobson. He pitched for the Orioles for two seasons, and had three Topps cards as an Oriole...and they were all highly unflattering. Since the O's traded for Dobson in December of 1970, he had a hastily airbrushed cap in his 1971 card. They also chose a portrait photo of Pat caught in mid-blink, for some unfathomable reason. In 1972, Topps rewarded Dobson for his 20-win season with a card featuring him in his actual orange, black, and gray Orioles uniform...as well as a dopey, open-mouthed gape. The Birds swapped the veteran pitcher to the Braves in the Earl Williams deal in November of 1972, which was too late for Topps to work their photo-doctoring magic on his first series card for the following year. This is the most appealing of Dobson's three cards from his tenure in Charm City, which is damning it with faint praise. He's not making an odd face, but he still looks disgruntled and rumpled. I'm also like 99% sure that this photo is not airbrushed, but the "Baltimore" script on his road jersey still looks off somehow, like it was hand-drawn. It's probably just some wrinkles and folds in the fabric that are making it sit in a certain way. Nonetheless, I'm left wondering who it was at Topps that had it in for ol' Pat Dobson.
Posted by Kevin at 10:42 PM

Hope all is well, big guy. Hope your long break is just because of dad duties and a historically terrible season. Either way, you still showed up this year more than Crush Davis, heyooo.