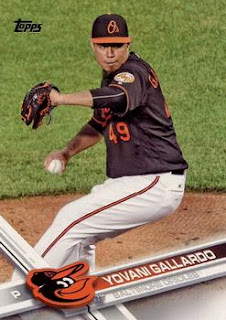 If you needed another reminder that baseball is a merciless meat grinder of a game, consider poor Yovani Gallardo. A 2010 All-Star with the Brewers, the righty used smoke and mirrors to post a career-low 3.42 ERA (121 ERA+) in his 2015 American League debut with the Rangers. This, despite his K/9 cratering to 5.9 after sitting at 9.0 three seasons earlier. The O's snatched him up for the 2016 season, but perhaps they should've stuck to their guns after noticing some shoulder damage on their notoriously thorough physical exam. Instead, they just downgraded the guaranteed third year of Yovani's deal to an option year and pushed onward. Naturally, after averaging 32 starts with a 3.69 ERA in the previous seven seasons, Gallardo took the mound only 23 times in 2016, pitching to an unsightly 5.42 ERA. In 66.1 fewer innings than he'd thrown in 2015, he allowed one more earned run and seven fewer walks. But hey, his K/9 took a dead cat bounce back to 6.5, so...yay?

Perhaps realizing that Yovani Gallardo hadn't brought much more to Baltimore than an excuse for fans to pronounce his name in an exaggerated Bawlmerese accent, Dan Duquette cut bait that offseason, trading him to Seattle for outfielder Seth Smith. The veteran didn't fare any better in spacious Safeco Field in 2017, seeing his ERA climb higher to 5.72 and even getting demoted to the bullpen for a Mariners club that didn't have many attractive rotation options.

Looking for a fresh start, Gallardo returned to Milwaukee on a modest, partially guaranteed $2 million contract in December. Would a return to the National League and his original team spark a renaissance? Alas, no. In eight games this spring, Yo was touched up for ten runs (seven earned) on twelve hits and eight walks in 13.1 innings. He struck out 12, if you're curious. The Brewers released him yesterday, a couple weeks after telling him that he was out of contention for a starting gig. So there you go; Yovani Gallardo just turned 32 and he looks pretty well cooked.
Posted by Kevin at 10:11 PM