It's been a good couple of nights in Birdland. Last night Janet and I treated our unborn child (six more weeks!) to its second O's game. A rare RAIN-FREE game, to boot! After Ubaldo Jimenez did his best to send us screaming toward the exit, somehow allowing "just" five runs on 14 base runners in five-plus innings, the Orioles reacquainted themselves with the ever-adventurous Detroit bullpen. A two-run spurt in the bottom of the sixth set the stage for a fantastic five-run seventh. The Birds swatted five singles in the span of six batters, with Pedro Alvarez's single squirting under Miguel Cabrera's first baseman's mitt and into right field to score Adam Jones with the tying run. Jonathan Schoop followed with the coup de grace, a line drive into the right field corner for his first career triple, plating Chris Davis and Alvarez with the go-ahead runs. From there, it was the tried-and-true formula of O'Day in the eighth and Britton in the ninth, 7-5 final. Baby B is 2-0. 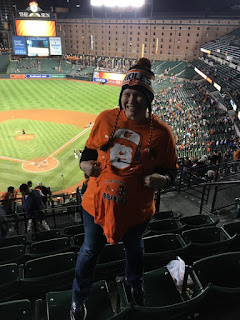 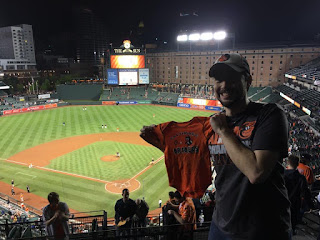 Tonight the Orioles made it six wins in a row with a 1-0 squeaker, and they're a season-best 10 games over .500 at 22-12. Chris Tillman continued his strong recent work with seven innings of five-hit, two-walk, seven-strikeout ball, and Adam Jones made a tough-luck loser out of Justin Verlander by crushing a solo homer into the Baltimore bullpen in the sixth inning. It was Adam's 200th career home run. When Tillman departed, O'Day and Britton again put up their customary zeroes in innings eight and nine. Zach's flawless ninth earned him his tenth save of the year and number 83 of his career, tying everybody's darling Jorge Julio for fifth-most in team history. Up next on the leaderboard is Stu Miller with 99, and Tippy Martinez isn't much farther ahead at 105.

Oh! And the Red Sox FINALLY lost, 7-6 to the Astros. So the O's are alone in first place again. It's better than the alternative, I'll say that.