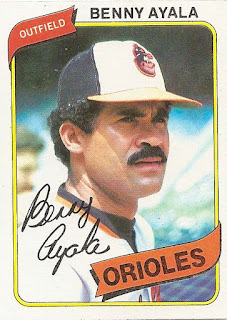 -His birth name is Benigno.

-He made his major league debut on August 27, 1974 with the New York Mets, and hit a home run against Astros pitcher Tom Griffin in his first career at-bat. He was the first player in Mets history - and the first native of Puerto Rico - to perform that feat.

-He batted only twice in the 1983 postseason, and drove in a run in each plate appearance: in the Game Four clincher in the ALCS, he had a pinch-hit sacrifice fly in the tenth inning to bring home the Orioles' third and final run. Ayala also batted for Jim Palmer in the top of the seventh inning in Game Three of the World Series, and delivered a game-tying single against Hall of Famer Steve Carlton. He also scored the eventual winning run on an error by Phillies shortstop Ivan de Jesus.

-In recent years, Benny has focused on helping his fellow Puerto Rican ex-big leaguers as part of the Baseball Assistance Team (BAT). He helps former players to acquire pensions, health insurance, instructional jobs, and more.
Posted by Kevin at 11:52 PM