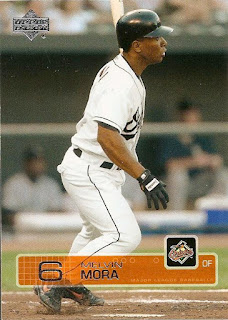 Next year, Melvin Mora will make his first, and likely last, appearance on the Baseball Hall of Fame ballot. This hardly seems possible, since I'm pretty sure it was just last year that I was cursing the name of Angels manager Mike Scioscia, who stubbornly stuck with his own left fielder (Garret Anderson) for four at-bats in the All-Star Game, and saw fit to give a 31-year-old Mora a measly pinch-runner appearance in his improbable All-Star debut. What's that? It's been nearly 13 years since the 2003 All-Star Game that I'm describing? I may need to sit down for a while and wrap my head around this.
Posted by Kevin at 11:39 PM