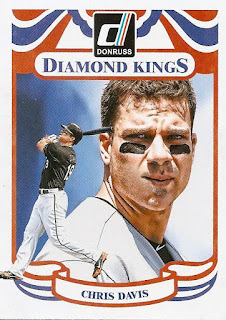 He's baaaaaaaack! Of course, he never officially left. At about eight this morning, news broke that Chris Davis and the Orioles had agreed to a seven-year, $161 million contract. This ends a lengthy staring contest between the O's and their most prolific power hitter. "Crush" has given me and the rest of Charm City a lot to cheer about in four-plus years with the team. Although I have my reservations about the Birds breaking the bank from now through age 37 for a player with such an uneven career record, I don't think there's any question that they're better in 2016 with Davis than they'd be without him. I'd like to think that Chris chose to remain in Baltimore in part because he wants to be the first player to hit the B&O Warehouse on the fly in an official game. That's what they call unfinished business.

There's still a month until pitchers and catchers report, and there may be moves left to make; there are certainly several significant free agents on the market. (I wouldn't mind a short-term splurge for Yoenis Cespedes or Justin Upton if the opportunity arises, and Doug Fister would be an intriguing rebound candidate in the rotation, for instance.) But the four major free agents from the Orioles - Davis, Darren O'Day, Wei-Yin Chen, and Matt Wieters - have all come off the board, and all but Chen are staying put. I wouldn't have predicted that, but then again, I came to terms long ago with just how little I really know about baseball.
Posted by Kevin at 11:55 PM