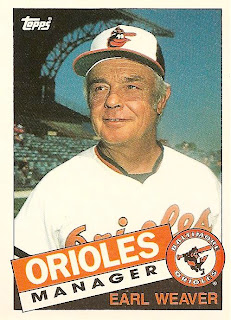 Yesterday the Orioles extended the contracts of manager Buck Showalter and GM (excuse me - that's executive vice president) Dan Duquette through the 2018 season. Keeping in mind the significant caveat that one or even both of them could still be fired before those deals expire, this is encouraging news, particularly as it concerns the man in the dugout. As Roch Kubatko astutely noted, Buck would have an eight-plus year tenure if he does indeed stick around through 2018. I was a bit surprised to learn that this would give him the second-longest reign as O's manager, behind only Earl Weaver. Of course, once you get past Paul Richards, the original architect of the Birds, there isn't a whole lot of competition. In my lifetime, only Mike Hargrove has lasted as many as four seasons at the helm, and his clubs averaged 93 losses per year. I suppose it's to Peter Angelos' credit that he never deluded himself into giving overmatched skippers like Dave Trembley and Sam Perlozzo multi-year contracts, but that's just a good sign that they shouldn't really have been hired in the first place. But as the Orioles sunk to the bottom following Davey Johnson's acromonious departure in late 1997, it became increasingly difficult to find qualified candidates who were actually willing to take the job. Now, not only has Buck Showalter restored professionalism and respectability to the Baltimore organization, he's actually agreed to stay throughout the decade. Long live Buck!
Posted by Kevin at 5:38 PM

I'm partial to Topps sets that feature the teams' colors so I like the 85 set. It's a great shot of Earl.