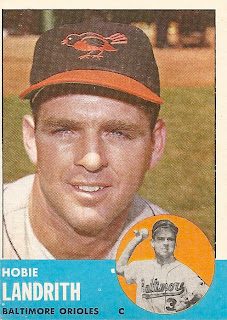 Yep, we've gone from Drungo to Hobie. Regrettably, Hobie is just a nickname. On the plus side, it's short for "Hobart". A few fun facts about Hobie:

-He was one of seven brothers to play catcher for Northwestern High School in Detroit.

-At age 15, he sometimes worked out at Briggs Stadium, helping Tigers pitchers warm up. He also helped Hank Greenberg get back in playing shape once the slugger returned from military service.

-The Mets made him their first pick in the expansion draft, with Casey Stengel rationalizing in his own inimitable way: "You have to have catchers or you're going to have a lot of passed balls."

-Hobie played only 23 games as a Met, but did deliver the team's first walkoff win with a two-out, two-run homer in the bottom of the ninth off of Milwaukee's Warren Spahn.

-His place in Mets lore was secured on June 7, 1962 when he was sent to the Orioles as the player to be named later in the May 9 trade that made Marvelous Marv Throneberry a Met.

-Landrith hit four home runs as an Oriole, but one of them was a game-winner off of Boston's Dick Radatz with one out in the ninth inning on June 22, 1962. It came with one out and Jerry Adair aboard, turning a 3-2 deficit into a 4-3 victory.

-At last check, he was residing in Sunnyvale, CA.
Posted by Kevin at 6:58 PM