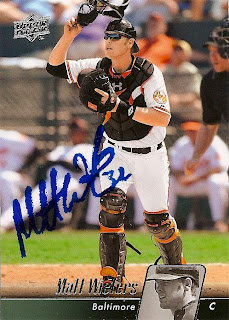 I know it seems cruel and unusual to post two 2010 Upper Deck cards back-to-back, but I have to let the chips fall where they may. This is the fourth of the five autographs that I collected on Saturday. The last will wait for Vintage Friday, which cannot come soon enough.

The hype that accompanied Matt Wieters to the major leagues would have been impossible for anyone to live up to, but it's still funny to see people treating him like a disappointment. He'll be 25 in May, and just completed his first full major league season. In 2010, he dealt with the responsibility of handling a pitching staff for 130 games on a team that wasn't exactly a model of stability. In one year, he became one of the best defensive catchers in the league by any measure. I'm willing to wait another year or two for his bat to catch up. Even though his batting line was a ho-hum .249/.319/.377 (89 OPS+), he did improve slightly in the second half (103 OPS+). I'm not worried about #32.
Posted by Kevin at 8:56 PM

I just found your blog the other day and this is my 3rd time back. Keep up the good work. I wish i could have made it to fan fest. Sounded like a great time. I collect Cal cards and have about 8,000 other Orioles cards that i am currently organizing and putting in yearly team sets. I'll keep reading. Thanks for the blog.

Thanks Bart! Good luck with your collection.