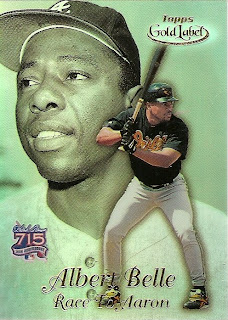 Got a quickie post today before I drive up to Philadelphia to meet up with some friends. I need a card that stands on its own and says something, and what it says is, "What?". Albert Belle was one hell of a hitter, but ten years into his career it was a stretch to mention him as a challenger to Hank Aaron's home run throne. The back of the cards projects him to play until he's 42, averaging 44 longballs a season. He had kept up that pace for the previous four seasons, which in a situation like this is a pretty small sample size. At age 31 with 321 career homers, he was still 434 away from Hammerin' Hank. Of course, the worst-case scenario occurred, with Albert clouting 60 more round-trippers in his first two years in Baltimore before an arthritic hip condition hobbled him and forced him to retire. He failed to reach 400 HR, much less 755. Whoops.

Have you seen many baseball cards with a more surreal image than the juxtaposition of classy, reserved Hank Aaron and explosive, violent Albert Belle? Thanks for the trip to Bizarro World, Topps.
Posted by Kevin at 4:06 PM

I think this insert set itself has more than a couple of trips to Bizarro World included when you consider the players being projected to surpass Hank's record
at that time:

There were also a couple of interesting omissions from the set:

Sammy Sosa - you'd think he was a no-brainer to be included considering he is 5 years younger than McGwire. Had a memorable 2003 that featured the corked bat incident and an alleged positive steroid test.
Manny Ramirez - had hit 45 HR's in 1998 at age 26. Hopefully after that course of HCG Manny can go back to being Manny again in the boudoir.

At least they chose Aaron's photo to be the large one. :-)

Andy - Yeah, I won't be rushing to complete this insert set.

They should reproduce that card, only with a picture of Matt Wieters instead of Albert Belle.