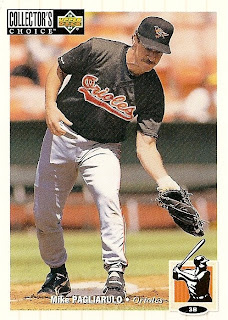 From the "Way Out of Left Field" Department:

Last year, Major League Baseball did away with the Hall of Fame Game, an annual midsummer exhibition between two teams at Doubleday Field in Cooperstown, NY. Sure, it was probably neat for folks to check out the Baseball Hall of Fame and Museum and pop next door to catch a game between big leaguers, but teams weren't going to risk injuries to their highly paid stars in a meaningless game. When Toronto actually let Sports Illustrated's Tom Verducci take the field for their exhibition against the Orioles two years ago, that was probably the final nail in the coffin.

But the Hall of Fame had a fairly neat idea: the Hall of Fame Classic, featuring retired players. Apparently they had trouble gathering enough interested (and able) Hall of Famers to field two teams. Only five participants are actually enshrined in Cooperstown: Bob Feller, Fergie Jenkins, Phil Niekro, Paul Molitor, and Brooks Robinson. There are some other familiar names, though, including Jim Kaat, Bobby Grich, Lee Smith, George Foster, and Bill "Spaceman" Lee. But then there's a sharp drop-off. Thought Mike Pagliarulo is a random choice, even he is a stronger selection than the likes of Kevin Maas, John Doherty, former Oriole Anthony Telford, or B. J. Surhoff's brother Rich. B. J.'s older brother was a big league pitcher? It was news to me, too.

Hopefully the most recently-retired players (Mike Timlin, Jeff Kent) will take it easy on some of the old-timers. I'm sure the Hall of Fame doesn't want to be held responsible for any serious injuries. If anything disappoints me about the roster of players, it's that Rollie Fingers is nowhere to be found. He usually takes part in the celebrity softball games at the All-Star Break, and he's pretty entertaining to watch. He even still has the handlebar mustache. So, which retired player would you like to see toe the rubber or swing the bat one more time?
Posted by Kevin at 10:52 PM

Definitely get some press if both of the bash brothers (Canseco and McGwire) showed up.

Big D - I could see that. Not quite as much chin, but then, who does have that much chin?