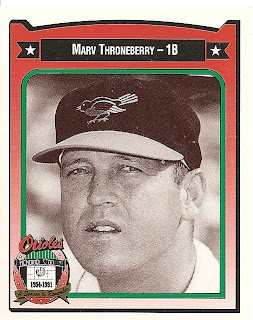 That's right; before Marv Throneberry was "Marvelous Marv", the clown prince of the 1962 Mets, he was an Oriole. After spending parts of three seasons with the Yankees and a year and a half in Kansas City, the flaky Tennessean was traded to the O's in June of 1961. He hit just .208 in 56 games in Baltimore that year, but did swat five home runs in 96 at-bats. His finest game as a Bird was the first half of a June 27 doubleheader, when he punished his former team by homering twice and singling in a run in a 5-3 win over the A's.

Throneberry actually began the 1962 season in Baltimore, but went 0-for-9 in nine games before being dealt to the Mets. There he became a legend for his often-bizarre gameplay, committing 17 errors in 97 games at first base and on one occasion being called out for hitting a triple and failing to touch second base. (According to legend, manager Casey Stengel came out to argue, but either the first base coach or the umpire warned him not to bother, because Marv had missed first base as well!)

With the Orioles rebounding from a game one loss to win back-to-back games against the Mets in exciting fashion, I thought "Marvelous Marv" would be an appropriate guest of honor this evening. Some of the nicest people that I've encountered online during my blogging and webmastering travails are Mets fans, so I hope they don't mind a good-natured tweaking!
Posted by Kevin at 11:16 PM

I love seeing these cards! Great story attached to it.

Steve - Thanks! I love any excuse to show off that set. It's a must have for O's completists.