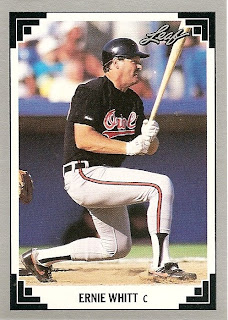 Ernie Whitt, huh? Whitt rhymes with twit, which is the first syllable of "Twitter". To date, I've taken a principled stand on Twitter, thinking (probably rightly so) that it was just another Internet time suck, an application designed to help our society amble along down the path of self-absorption and text-message-ish illiteracy. I still have my reservations, but my resolve is crumbling. Frankly, I can see some benefits to being the absolute last person on this particular online train. Often, I don't get a chance to update my NumerOlogy website as quickly as I'd like when there's breaking uniform number news with the Orioles. If I had a Twitter account, I could fire off a quick burst to inform the masses (i.e., the five people who would actually follow me). Then, when I had more time, I could post a proper update on the website itself. I could also post links to my writing whenever I had a new entry here, or on my 1965 Topps blog, or even at Crunchable. Maybe I'd even regale you with an occasional 146-character dose of my sparkling wit. There is still one thing that I will absolutely not bend on, ever: under no circumstances will I refer to the process as "tweeting". If I'm being honest, that's at least 30% of my issue with Twitter.

So, I'm giving you a say in this, readers. Should I be the next Twitter...guy? Should I stay out of it? Do you not give a flying fig one way or the other?
Posted by Kevin at 11:51 PM

I can see advertising on twitter that you have new posts coming up on your blogs. That's one benefit.

But otherwise, twitter just doesn't appeal to me, either as a writer or a reader. I like to write without any limit on what I write. Otherwise, I would consider it work.

"I just bought a gold fish." Is not anything I would be tuning in to on a regular basis.

So you may not be the last one on twitter. That'd be me.

It's like the blog - if you think you can do it regularly then do so. If its going to be a struggle, whats the point?

Getting back to Ernie - what a shot! That is a classical pose. I love how both his legs are a perfect right angles. Very cool.

I think using Twitter to announce updates to websites, blogs, businesses, whatever, is kind of a good idea.

I signed up for it awhile ago but barely use it because I decided it's dumb for individuals generally. People can only get away with that if they are extremely witty or famous. Otherwise it's boring.

Why does everyone have to know everything instantly? (And I am basing that on what I have heard Twitter is all about).

I suppose it might be useful to know that you updated the blog if I used a phone of something on the road to surf the internet. But as it stands now I'm not seeing it. Nothing, short of a family crisis or the Apocalypse, is so important that it can't wait until I check my computer at lunch hour or at night. And for a family crisis I just rely on my boring basic cell phone.

Sometimes (disclaimer: I'm an older guy prone to ranting about these things) the information age is just too damn... informational.

Sometime, when I have a couple hours to kill, I'll give you my complete, patented "Swine Flu Rant". LOL, or maybe I won't.

Kevin... none of the above was directed at you personally. I just go off sometimes, and the words 'twitter' and 'tweeting' make me cringe.

I don't see the appeal. Between cell phones, im, emails and blogs there are already plenty of ways to get information out there...

Information such as the fact that I actually saw Ernie Whitt yesterday. He's down here coaching the Clearwater Threshers looking at the bit like a former athlete.