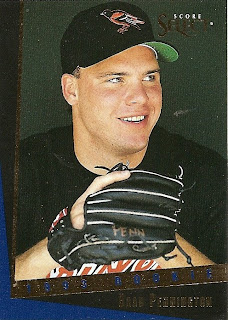 Former Orioles reliever, or should I say "thrower", Brad Pennington was born on April 14, 1969. Of course, that wasn't the only terrible thing that happened to the O's that year. Baltimore was the juggernaut of the American League, winning 109 games and losing 53 for a .673 percentage. No other team in the A.L. came within a dozen games of that win total, and the club had at least a ten-game lead in the Eastern division every day from June 28 through the end of the season. There were only five losing streaks of three games or more, and the longest was a five-game skid at the end of the regular season. They steamrolled through the 97-win Twins in the ALCS in three straight, and that's when things got weird.

Their World Series opponent was the New York Mets, a team that didn't exist until 1962 and was a laughingstock for most of the decade. The Mets shouldn't have been overlooked, as they'd won 100 games and engineered a thrilling stretch run to overtake the front-running Cubs. But most prognosticators assumed that the Birds would have little trouble dispatching the boys from Flushing. Of course, we know what happened; not only did the O's not beat the Mets, they only won a single game in the entire Series. The "Amazin' Mets" became a part of baseball history, and a team that many (including most of the men who played on it) considered the best team in franchise history was relegated to something of an afterthought.

I wasn't even born until 1982, by which time only three members of that great Baltimore team were still active. The Birds won the World Series the following year, and they would do it again in 1983. But to this day, I still feel pangs of disappointment, regret, and annoyance when I read or hear about those "Amazin' Mets". I have no rational reason for this; the only one of those guys that I ever saw play was Nolan Ryan, and by that point he was a 46-year-old veteran at the end of the line. But there's nothing rational about being a sports fan, and I'm blind to the thrilling topsy-turvy underdog storyline in that 1969 Fall Classic. From my viewpoint, they were a bunch of lucky stiffs who denied Earl Weaver, Jim Palmer, Brooks Robinson, and crew their rightful place alongside the great baseball dynasties. I've done my homework. I know that J. C. Martin should have been called out for interference, and that Frank Robinson got hit by that pitch (but Cleon Jones didn't). I know that Ron Swoboda's diving catch was a bit of happenstance...

So here we are again. Orioles vs. Mets. New York just took the first one. Sloppy fielding. An inability to get that clutch hit. History better not repeat itself over the next two days.
Posted by Kevin at 10:16 PM

The '69 Series was a low point in my life as a sports fan. Gil Hodges couldn't make a wrong move, and it had been that way all year. Player for player the Mets shouldn't have been on the same field as the O's but pitching can do a lot to level a short series playing field. Nearly 40 years later and I can still remember how sick I felt after the last flyout to Cleon Jones. Oh, man.

Jets beat the Colts in SBIII, Mets beat the O's in the Series and then the Knicks beat the Bullets in the NBA Eastern Finals. For a Charm City guy living near New York City it was a nightmare that seemed to last forever.

Hey it's my least favorite Oriole ever.

Bob - Does anything hurt as much as that Super Bowl loss?

Stacey - Yeah, I heard something about that. You two are not BFF, as I understand it.