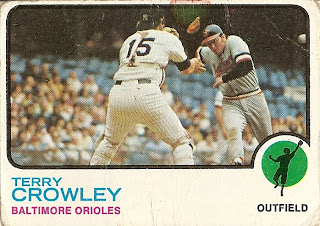 Today we see Terry Crowley chugging down the third base line in Yankee Stadium. Standing in his way is All-Star Yanks catcher Thurman Munson, whose life and careeer came to a premature end in 1979, when he crashed while trying to land his personal plane. Munson was 32. But here, in this action shot from 1972, he is in his prime and ready for battle. Though "The Crow" has all the momentum from his charge around the basepaths, there is an uneasy look on his face, as though he's about to hit a brick wall. His right hand is raised in the air; though he could be preparing to strike at Munson in an attempt to jar the ball loose, it's just as likely that his thoughts have turned to self-preservation. After all, the ball has not yet arrived. We see it just inside the frame of the photo, blurred with motion. Terry is close enough to the catcher that he runs a real risk of getting pegged in the head with the hard white spheroid. Adding to the sense of impending violence, this card has a mysterious red stain right between the heads of the two combatants. Sure, it looks more like ink from a bingo marker, but it could very well be blood. Whose blood? Thurman's, or the Crow's? Maybe a little of each?

I'm not sure what the outcome of this play, or even this game, might have been. I've searched the invaluable Baseball-Reference.com and it appears that the only game in Yankee Stadium in 1972 in which Terry Crowley was involved in any plays at the plate was a June 29 contest, which the Yankees won 4-3. The Crow scored twice: once from third base on a Brooks Robinson single to left field, and once from third on a wild pitch with Elrod Hendricks batting. He was also thrown out trying to score from third on a Brooksie grounder to third baseman Celerino Sanchez. By process of elimination, the ball is coming from the field of play, so this wouldn't be the wild pitch play. On the other run, Brooks hit the ball through the infield. I'd like to think that even Terry wasn't slow enough to turn a two-out hit to the outfield into a close play at home (he would have been running on contact with two outs). Sadly, I think he was out on this play, and the O's lost to boot. According to the box score, the attendance was 8,438, which would explain the sparse crowd that serves as the backdrop to this photo.

So buck up, Crow. At least nobody was watching this game.
Posted by Kevin at 2:02 PM

This is one of my favorite cards, because of the great action shot. I got the Crow to sign this at an Oriole Fanfest a few years back and asked if he remembered the play. He did, all too vividly. Not only was he out on the play, but the ensuing collision with "his good friend Thurman Munson" (Crow's exact words, with some underlying sadness) resulted in a broken leg for the Crow.

Tim, thanks for sharing! I can imagine that most base runners vividly remember their run-ins with Thurman Munson. Tough break for Crow, though.