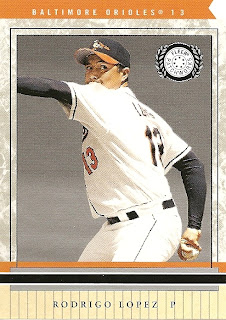 I received this card in a random assortment of Orioles cards that a friend included in a recent trade. It's nice looking, kind of classy. I like Rodrigo Lopez, and this was my first card featuring his likeness. But I chose this card because it comes from a set that I never even knew existed. I'm not sure why it existed, nor am I convinced that it needed to exist. In that way, it's emblematic of what baseball card collecting has become.

You'll have to forgive me. I'm a little shell-shocked as I type this entry. I've just made my most expensive baseball card-related purchase ever.

I've always considered myself a very thrifty guy. It's probably something that was instilled in me by my bargain-hunting father, who grew up with five brothers and a very tight family budget. When I buy groceries, I make a beeline for the store-brand items and sales. I save every penny I find or receive in a piggy bank. As it pertains to baseball cards, I've always been the type to seek out 4 for $1.00 packs of 1989 Topps or bargain-priced grab bags instead of grabbing up the Next Big Thing in the hobby. Even since returning to full-time collecting in mid-2007, I've been careful to cap my monthly spending somewhere around $30.

But then I laid eyes on the sell sheets for 2008 Topps. I fell in love with the whimsical-yet-simple design of the base cards, not to mention the inserts that ranged from nostalgia-inducing (Baseball Card History) to quirky (Campaign 2008). I had to have them. This was meant to be the first set that I'd attempt to hand-build since the mid-Nineties. So I went online and started pricing boxes.

The bare-bones hobby boxes go for 50-60 dollars. So taking the advice of Dave the Cardboard Junkie I ordered a Jumbo Hobby Box: 10 packs, 46 cards per pack, a slew of inserts (including at least one autograph and one relic) guaranteed. $86.95. Besides all of the insert goodies, I have a much better shot at completing Series One with the jumbo box.

So where did the other 30 bucks go?

The online store I used offered free shipping on orders over $100. Part of my spending philosophy is that I'd rather get something else and spend a little more than I'd planned than spend $8-$10 to get something I've already bought shipped to me. So I cruised their site and settled on a jumbo box of 2006 Topps Series Two, since it was relatively cheap and I don't have much of that set yet.

I'm a sick man. I've spent the entire morning rationalizing this purchase any way I can (my tax refund will be more than enough to cover the cost, maybe I'll sell unwanted inserts on eBay, etc. etc.), but ultimately I feel like I've played right into the hands of the money-hungry card companies. I swore that I wouldn't be distracted by bells and whistles and shiny things, that any more than $2 a pack was highway robbery, that card collecting should be for kids and just for the love of it all. I have a creeping sense that I've become what I'd fought against.

But I just know that the doubt and self-loathing will be shoved out of my mind when I start ripping packs next week.

Don't worry big guy. If you only do it once or twice in your life, consider it a vacation from the normal hobby experience. I know how you feel, however, because I once bought a $25 pack of cards [2001 SP Game Bat] on a 15 year-old's "salary"...I pulled an Alex Rodriguez game-used bat, which is good, because had I pulled a relic of someone like Jose Cruz Jr. I probably would've cried myself to sleep for a week.

Oh, I already feel better. After all, my order is shipping in the next 24 hours, which means I'll have some packs to rip very soon.

Wow. All those subsets and specialty cards. I feel like a very old man.
Good luck -- hope you pull all kinds of good stuff.